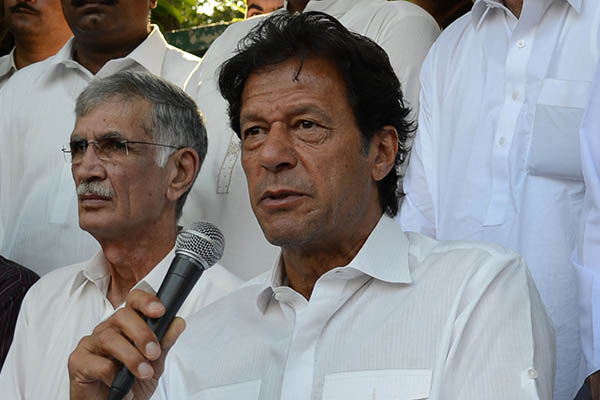 Pakistan’s Supreme Court on Friday ordered cricketer-turned-politician Imran Khan to respond in more detail over allegations that he committed contempt by making derogatory remarks against the judiciary.

Khan, the head of the Pakistan Tehreek-e-Insaf, which made a breakthrough in May elections, has stated that the polls were rigged and alleged that the role of the judiciary and the election commission in the polls was “shameful.”

In response, the Supreme Court ordered him to appear Friday to explain his “derogatory language against the Supreme Court and its judges, and a deliberate campaign to scandalize” the judiciary. Analysts believe the court was seeking Khan’s unconditional apology for his statement.

However, during Friday’s hearing, Khan defended his remarks, and the three-member bench headed by Chief Justice Iftikhar Muhammad Chaudhry said it was not satisfied. “The explanation is not acceptable. The case is adjourned until Aug. 28,” Chaudhry told Khan, directing him to submit a fresh reply before the next hearing. If convicted, lawyers say Khan faces up to six months in prison.

When asked if he planned to submit an apology at the next hearing, Khan told reporters he had done nothing wrong. “I have not done anything wrong … why should I apologize?” he said outside the court. “I have not said anything which can lead to the punishment. I can’t use such words for the superior judiciary, I referred to the returning officers who conducted elections,” he added.

During the hearing, the court asked Khan to justify how the returning officers in one province—Punjab where Khan’s party alleges the rigging took place—were corrupt while those in Khyber-Pakhtunkhwa, where his party has formed the government, were fair and balanced.

Pakistan’s previous government accused the judiciary of politically motivated meddling when it sacked prime minister Yousaf Raza Gilani after finding him guilty of contempt. Gilani was convicted for refusing to write to Swiss authorities asking them to reopen corruption cases against President Asif Ali Zardari on the grounds that he had immunity as head of state.