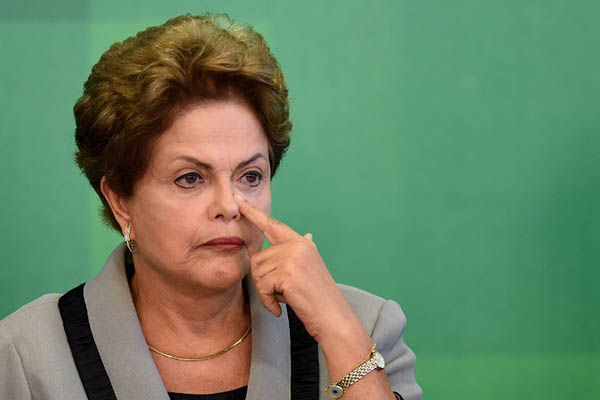 Brazilian president’s proposal includes laws to bar anyone with a criminal record from serving in public office.

Brazilian President Dilma Rousseff announced a package of anti-corruption bills Wednesday as she sought to battle back from a devastating scandal at state oil giant Petrobras that has ensnared her party.

“We are a government that does not tolerate corruption and we have the duty and obligation to fight impunity and corruption,” she said in the wake of massive protests against her administration. The package includes bills to criminalize under-the-table campaign contributions, seize property from government officials who cannot document its origin and bar anyone without a clean criminal record from serving in public office.

Rousseff is reeling from nationwide demonstrations against her that drew hundreds of thousands of Brazilians into the streets Sunday. Her approval rating has plunged to a dismal 13 percent, according to a poll published Wednesday—disconcerting for a politician who is just a few months into her second term.

The left-wing leader has presided over a sharp slowdown in the world’s seventh-largest economy and rising inflation, as well as the scandal at Petrobras, whose board she chaired during much of the period under investigation. Prosecutors say the state-controlled oil giant awarded inflated contracts to some of the country’s biggest construction companies over a 10-year-period, generating a flood of dirty money used to bribe Petrobras officials and pay off politicians.

Nearly 50 politicians, many of them Rousseff allies in Congress or leaders of her Workers’ Party, are under investigation. Among those charged is Workers’ Party treasurer Joao Vaccari, accused of receiving huge bribes that he insists were legal campaign donations.

Rousseff, 67, has not been personally implicated in the scandal, and the Supreme Court on Wednesday rejected an opposition request to investigate her. But her popularity has taken a beating.

Sixty percent of those surveyed in Wednesday’s poll said they believed the country’s economic situation was worsening, against 15 percent who thought it would improve—the most negative result since polling firm Datafolha began asking the question in 1997.

The poll also showed fall-offs in Rousseff’s popularity in all socioeconomic groups, as well as in areas considered strongholds for her party. Disapproval of her performance was the highest for any president since Fernando Collor de Mello in September 1992, on the eve of his impeachment. At the time, Collor resigned after Brazil’s lower house voted to try him amid a separate corruption scandal. He is now a senator implicated in the Petrobras case.

Rousseff, who became Brazil’s first woman president in 2011, narrowly won re-election to a new four-year term in October. A former leftist guerrilla known for her tough managerial style, she has struggled to tap the same popular support as her charismatic predecessor and mentor, Luiz Inacio Lula da Silva.