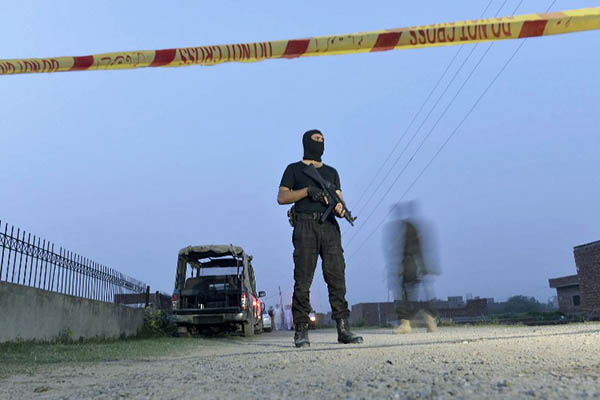 Authorities evacuated a girls’ school Friday when hundreds of terrified parents rushed to save their daughters after rumors of an attack, highlighting frayed nerves days after gunmen stormed a university killing 21 people.

The incident in Punjab province came as the Taliban faction behind Wednesday’s massacre at the Bacha Khan University in Charsadda vowed to target schools across Pakistan.

Police said rumors of an attack at the Tandlianwala girls’ high school in Faisalabad had spread swiftly, sending teachers and students racing for safety. “The panic increased after a security guard fired shots in the air as students and teachers were running to the main gate,” said Mehar Fazal Abbas, a senior police official.

Another police official in Tandlianwala confirmed the incident and told AFP that some girls had phoned their parents for help as the rumor spread. Hundreds of parents raced to the school to protect their children, he added.

Video footage seen by AFP shows terrified parents shouting and kicking at the school’s main iron gate. Authorities later evacuated the school and closed it down.

On Thursday, one day after the attack, authorities carried out a mock drill at a university in Punjab that saw a similar panic among students who did not realize it was fake.

The incidents underscored feelings of insecurity two days after heavily armed gunmen stormed the campus in Charsadda, killing 21 people in an attack that had chilling echoes of a 2014 assault on a school in nearby Peshawar. Security forces were still deployed in Charsadda on Friday, while in Peshawar, two policemen were shot dead at a checkpoint by unknown gunmen.

The Taliban faction that has claimed responsibility for both those attacks issued a video message Friday vowing to target schools throughout the country. Mansoor issued a similar video in the wake of the Peshawar attack on December 16, 2014, which left more than 150 people dead—mostly children—in Pakistan’s deadliest ever extremist assault.

Analysts have said the extremists are targeting schools because the killing of young people “brings a lot of pain, despondency and hopelessness,” Peshawar-based senior analyst and retired brigadier Saad Khan told AFP this week.

Defense and security analyst Talat Masood agreed. “They are looking for soft targets and it is simply impossible to provide security to the soft targets, especially those near the border [with Afghanistan],” he said.

Teachers in northwest Pakistan were given permission to carry firearms in the classroom after the Peshawar massacre. One of those who died in Wednesday’s attack was an assistant chemistry professor who had turned and fired on the gunmen with his own pistol as his terrified students raced for cover.