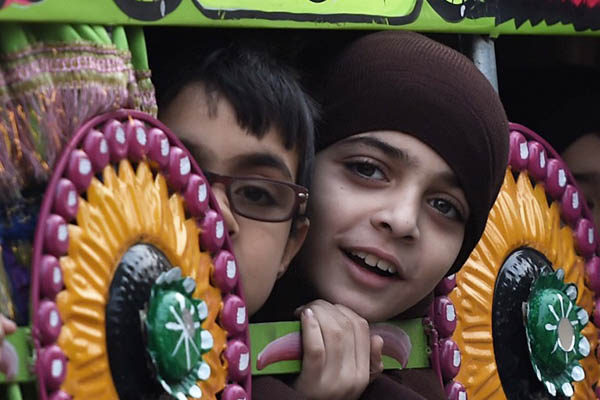 PCB donates Rs. 7.5 million for the families of the dead and the rebuilding of the Army Public School.

Along with Haq, popular all-rounder Shahid Afridi, Umar Akmal, Ahmed Shehzad, Ehsan Adil, Yasir Shah and Mohammad Irfan visited the Army-run school in Peshawar where 150 people, most of them children, lost their lives on Dec. 16.

Misbah said meeting with students who survived the attack had given the cricketers enormous courage ahead of next month’s World Cup in Australia and New Zealand. “It was a great feeling,” said Haq. “The kids gave us tremendous courage and wished the best for us in the coming World Cup.” He added: “The best part is that these kids have rejoined the school and their spirit is an encouraging sign for the players, which is to never give up, whatever you do. And with this motivation, we will try to win the World Cup.”

Haq said the children had promised to watch the World Cup, which starts on Feb. 14, and to pray for a Pakistani victory. Afridi said the students had taught the players that “the one who saves is greater than those who tries to kill.”

“We are hugely motivated by these kids,” said Afridi. “I asked one kid how he survived after being shot in the chest and he replied that his chest is not weak. We want to show the same courage in the World Cup and win the event for our nation and for our people and kids like these.”

Pakistan team manager Naveed Cheema said meeting the players had brought much-needed joy to the children, too. “Those were touching scenes,” said Cheema. “The faces of kids were glowing at the sight of the players, and parents of those who died want us to win the World Cup for their dear ones. Players have promised that they will do their best for the Peshawar victims,” said Cheema, who also handed over a check of Rs. 7.5 million from the Pakistan Cricket Board.

The PCB had announced that the gate money from December’s fourth one-day international between Pakistan and New Zealand in Abu Dhabi would go to the families of the dead and toward rebuilding the school.

The Pakistan team flies to Auckland on Jan. 21 for two one-day internationals against New Zealand on Jan. 31 and Feb. 3. They then move to Australia and will play two warm-up games on Feb. 9 and 11.

Their World Cup campaign begins with a high-profile game against rivals and title-holders India in Adelaide on Feb. 15.