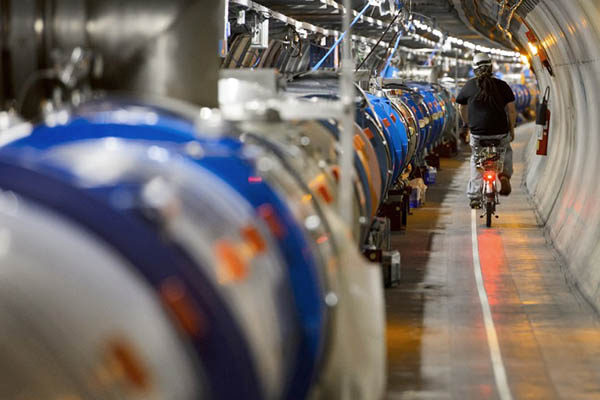 New particle had long been theorized and has finally been confirmed by the Large Hadron Collider.

Scientists at Switzerland’s Large Hadron Collider announced on Tuesday they had discovered a new kind of particle called the pentaquark.

LHCb spokesman Guy Wilkinson said the pentaquark represented a way to combine quarks—the sub-atomic particles that make up protons and neutrons—“in a pattern that has never been observed before in over 50 years of experimental searches.” He added: “Studying its properties may allow us to understand better how ordinary matter, the protons and neutrons from which we’re all made, is constituted.”

The LHC cranked back up again in June after a two-year upgrade, with scientists hailing a “new era” in their quest to unravel more mysteries of the Universe.

The new tests at the European Organization for Nuclear Research (CERN) have twice the energy levels they had during the last three-year experiment phase, when the existence of the Higgs Boson was confirmed. Four laboratories are located along the LHC’s ring-shaped tunnel around a hundred meters underground, where scientists analyze collisions between particles moving at close to the speed of light.

The LHCb, one of the four experiments, is focused on understanding the differences between matter and anti-matter and analyzing certain quarks. “Our understanding of the structure of matter was revolutionized in 1964 when American physicist, Murray Gell-Mann, proposed that a category of particles known as baryons, which includes protons and neutrons, are comprised of three fractionally charged objects called quarks,” CERN said in a statement.

Gell-Mann, who won the Nobel Physics Prize in 1969, further proposed another category of particles, mesons, formed of “quark-antiquark” pairs. His model allowed for the existence of other quark combinations, such as pentaquarks, which are composed of four quarks and an antiquark. But no conclusive evidence for pentaquarks had been seen until now.

The LHCb experiment changed the game by allowing scientists to “look for pentaquarks from many perspectives,” CERN said. The findings have been submitted to the journal Physical Review Letters.

The next stage of the research will focus on studying how the quarks are bound together within the pentaquarks, the nuclear laboratory added.