Scotland Votes ‘No’ to Independence 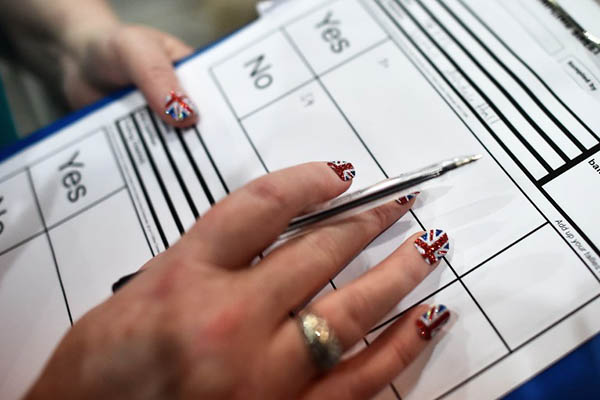 Scotland has rejected independence in a referendum that leaves the United Kingdom intact but opens the door to wider autonomy following a huge turnout, preliminary results showed Friday.

The “No” camp was ahead by 55.42 percent to 44.58 percent for the “Yes” camp with 31 out of 32 local areas counted. “No” campaigners across Scotland cheered as the results came in, while “Yes” activists watched dejected and in tears.

The outcome dashes the hopes of the hundreds of thousands of Scots who voted to break away on Thursday in an unprecedented vote that ignited debate about governance in Britain but will reassure those worried about the economic risks of a break-up. The financial markets rewarded the result with the pound rising against the dollar on the currency markets.

“We know that there’s going to be a majority for the ‘No’ campaign,” pro-independence First Minister Alex Salmond said in Edinburgh. “Scotland has by majority decided not, at this stage, to become an independent country,” he said.

The result is a blow to the ambitions of a political lifetime for Salmond, although the strong result for the “Yes” leaves open the possibility of another bid for independence in future.

There were some big wins for the “Yes” campaign, including Sturgeon’s home city of Glasgow, but the margin was not enough to mitigate a flood of “No” votes across Scotland. The indication was that better-off and rural areas had voted “No” while urban centers and poorer parts voted “Yes.”

The “Yes” camp had been behind by a huge margin for months but in the past fortnight enjoyed a surge in support in the opinion polls. In the end, it did not materialize. “Clearly the ‘No’ side has won,” said polling expert John Curtice, a professor of politics at Strathclyde University.

The vote would have brought to an abrupt end a union with England stretching back to 1707 and has been closely watched around the world, giving heart to separatist movements from Catalonia in Spain to Quebec in Canada.

Prime Minister David Cameron and Queen Elizabeth II were both expected to make announcements later on Friday, with British media reporting that Cameron would acknowledge the number of “Yes” votes and promise further devolution.

The outcome will be a huge relief for Cameron, who many suggested could not have survived in the event of a “Yes” victory.

In a tweet after the BBC called the result, Cameron said simply that he had spoken to the leader of the “No” campaign, Alistair Darling, “and congratulated him on a well-fought campaign.” In a latter statement, he said the Scottish parliament would have greater powers, including “issues of tax, spending and welfare.” He also advocated similar processes for both the U.K. and Wales.

The historic decision gripped many Scots who previously took little interest in politics, including 16 and 17-year-olds allowed to vote in an election for the first time, and divided families and lifelong friends between “Yes” and “No.”

There were queues outside polling stations on referendum day and many voters spoke emotionally about the most momentous political choice of their lives. “Should Scotland be an independent country?” was the simple question facing voters in the nation’s 5,000 polling stations with “Yes” and “No” boxes below.

Crowds later partied through the night in Glasgow and Edinburgh, draped in the blue-and-white Scottish flags and setting off flares, as ballot boxes were brought in by helicopter and by boat from remote islands for the count.

In the run-up to the vote, Britain’s three main political parties promised greater powers for Scotland’s parliament including on tax and benefits in a last-minute bid to convince voters to stay in the union.

Deputy First Minister Nicola Sturgeon said the referendum had shown a “strong demand for change” and insisted the British government in London must now make good on its promises. “Scotland has changed forever, there’s no turning back,” she said on Friday.

Scotland’s Parliament, opened in 1999, currently holds some powers devolved from Westminster to set policy in certain areas of domestic policy, such as health and education.