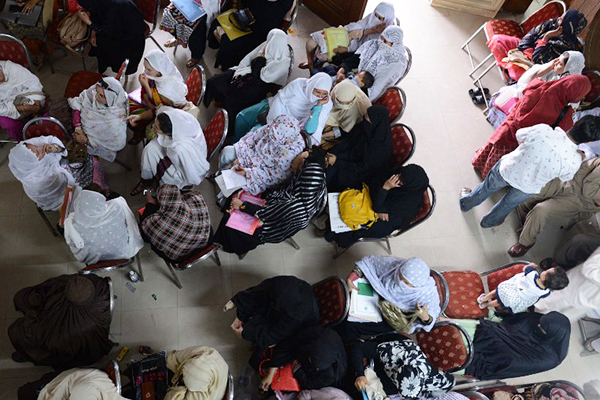 FAFEN officer claims none of the 1,209 rejected candidates for Pakistan’s National Assembly were disqualified on the basis of corruption.

After a week of sometimes bizarre scrutiny of candidates for Pakistan’s nationwide elections, which are scheduled for May 11, fears are growing that the process has failed to weed out the bribe-takers and tax dodgers it was meant to target.

There has been furious debate about the vetting process for the national and four provincial assemblies, after returning-officers grilled candidates on Islamic prayers and rituals and even hit them with baffling general-knowledge questions. The Human Rights Commission of Pakistan, an independent nongovernmental organization, said the scrutiny process had turned into a “witch-hunt aimed at harassing and humiliating candidates” and was undermining democracy.

Two clauses of the country’s Constitution, Articles 62 and 63, requiring lawmakers to be knowledgeable about Islam and follow Islamic injunctions lie behind the questioning. They were introduced by military dictator Gen. Zia-ul-Haq in the 1980s but lay largely ignored until cleric Tahir-ul-Qadri launched an anticorruption campaign earlier this year, leading tens of thousands of protesters into the streets of the Pakistani capital demanding rigorous scrutiny of politicians. Qadri’s message struck a chord. Pakistan’s politicians are widely viewed as venal, and few elected representatives apparently pay tax.

Sarwar Bari of the Free and Fair Election Network (FAFEN), an independent group which monitors elections in Pakistan, said the returning-officers—who have rejected 1,209 out of 8,059 National Assembly nominations—had missed the key issue: corruption. “In my view, corrupt politicians have been given clearance and that is very sad. It has damaged people’s trust in the whole process,” he said. “The biggest issue in Pakistan is corruption and that has not been addressed—no politician so far has been disqualified on that basis.”

A report by a group of Pakistani journalists in December claimed that two thirds of federal lawmakers paid no tax the previous year. Under election laws, anyone who fails to pay their taxes or utility bills or who has outstanding debts of over Rs. 2 million is disqualified from running for Parliament.

Two English-language newspapers ran editorials on Thursday denouncing the apparent failure to apply the rule. The News lambasted the “dismal, disappointing and shameful” amount of tax paid by M.P.s in the past three years and voiced surprise that “not one big name has been disqualified for not paying taxes or defaulting on bank loans.” Wrote the Express Tribune: “Not being able to recite Quranic verses became grounds for disqualification but financial impropriety is apparently considered more kosher.” Cleric Qadri himself took to Twitter to claim that the “majority of the people getting ‘elected’ to legislatures would be tax evaders and loan defaulters.”

The 425 returning-officers, who are drawn from the ranks of junior judges, have had a busy time, with more than 24,000 nominations—including those for the provincial assemblies—to look through. FAFEN’s Bari said the Election Commission had not given them the resources or the training they needed to examine the prospective M.P.s’ financial submissions properly. “The Election Commission could have got people from accountancy—at least five or six accountants should have been deployed along with every [returning-officer],” he said.

Consistency has also been an issue. Pakistan is unusual in that candidates can run for more than one seat. Many prospective M.P.s, notably former president and Army chief Pervez Musharraf, have found themselves approved to contest from one place but have been turned down elsewhere. The chief of the EU election monitoring mission, Michael Gahler, has stressed “there should be objective criteria, due process, and consistent application” for any restriction on the right to stand in polls.

Election tribunals will hear appeals against the returning-officers’ decisions over the coming week, with most of the 1,209 who were turned down expected to contest the rulings. The final list of candidates cleared to run will be published April 19.