Second Day of Protests Over Child Rape and Murder 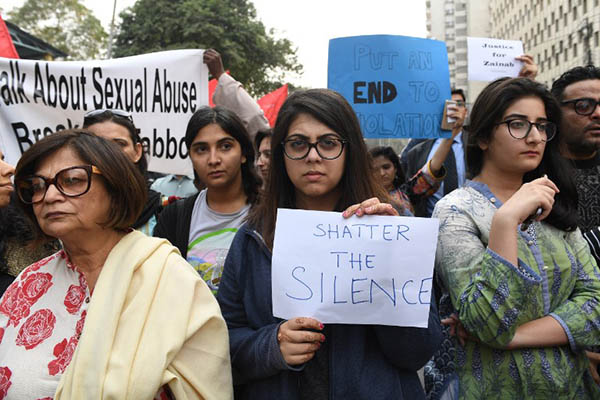 Hundreds of protesters enraged over the murder of a young girl threw stones at government buildings in Kasur for a second day on Thursday, amid growing outrage over the killing.

The demonstrators hurled projectiles at a hospital, attacked the home of at least one local politician, and complained of police inaction in the city of Kasur in Punjab province, a day after two protesters were killed when the rallies turned violent. The outrage has spilled over in Kasur after the body of a child was found in a garbage heap Tuesday, where she is believed to have been dumped after being raped and murdered.

The child, named as Zainab, is the eighth minor to have been raped and murdered in Kasur in the past 12 months, police have said. Officials had earlier put her age at eight, but her family told AFP that she was just six years old.

“Up to 1,000 protesters are in the streets,” said Kasur police spokesman Muhammad Sajid. “They have thrown stones on the buildings of the government hospital, police and deputy commissioner’s office… Security is deployed and trying to control the situation.”

The demonstrators had accused police of failing to act over the child murders.

Sajid said that up to 20 suspects had been apprehended “but the investigators have been unable to find any clue so far.”

“Police are not cooperating with us,” claimed Ghulam Rasool, an uncle of Zainab. “We want justice. We want the culprit to be brought in front of us. We don’t want an innocent to be presented as the culprit and killed just to wash this case.”

On Wednesday at least two protesters were killed when police fired into the crowd of demonstrators as they tried to storm a government building in Kasur, a senior police official told AFP on condition of anonymity.

Anger at police has been fueled by Kasur’s infamy as the site of what has been dubbed Pakistan’s largest child abuse scandal. The 2015 scandal saw allegations that at least 280 children were filmed being sexually abused by a gang of 25 men who blackmailed their parents by threatening to leak the videos.

It came to light after parents of the victims clashed with police in Kasur during a protest blasting authorities for failing to prosecute the case. The Punjab government has announced a reward of 10 million rupees for information leading to the killer’s capture, as well as compensation packages for the protesters killed on Wednesday.