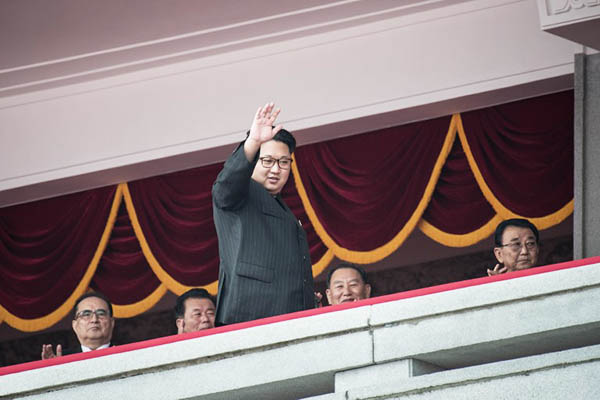 Foreign journalists invited to cover the Workers’ Party congress—the first for 36 years—had previously got no closer than 200 meters from the April 25 Palace, where some 3,400 delegates began meeting last Friday.

On Monday some of the 130 reporters invited to North Korea specifically to cover the event actually made it into the meeting, albeit for just five minutes.

The media invitation was not unique—journalists were allowed into the last congress in 1980, before Kim was born—but still rare for a nation, which opens up only selectively. The spectacle inside the palace was gripping political theater.

Thousands of serious-looking men—plus the occasional woman—in sober suits, along with servicemen weighed down by chests-full of medals, occupied row after row of red seats in the cavernous hall. As music blasted out, they rose to their feet in unison and began a round of thunderous applause when Kim, flanked by other top officials, strode onto the stage.

He waved to delegates as the clapping echoed around the hall.

The official head of state, Kim Yong-Nam, then announced senior posts in the party—including a new position of party chairman for leader Kim, seen as further bolstering his authority.

Journalists were ushered out after five minutes but the preparations for their brief visit had taken hours. Security was intensely strict. Reporters who assembled at a nearby venue were patted down and checked minutely with a hand-held wand.

Cellphones and all potentially suspicious items, even metal ballpoint pens, were confiscated till after the meeting. Photographers’ stepladders were banned.

Security staff made three further checks with hand-held wands at the April 25 Palace and equipment was scanned again. Inside, a gleaming reception hall with marble columns and chandeliers featured a massive red carpet and a 50-meter-long backdrop with images of late leaders Kim Il-Sung and Kim Jong-Il, the current ruler’s grandfather and father.

Long rows of congratulatory bouquets lined the opposite wall.

Before entering the congress hall, journalists were told not to photograph or film the notes, which each delegate assiduously made of proceedings.

The massive grey stone venue is bedecked with huge party banners and large portraits of the late Kims.

Central Pyongyang has been festooned with party flags and the party symbol—a hammer, sickle and calligraphy brush representing factory workers, farmers and intellectuals—during the congress.

Like his father and grandfather before him, Kim Jong-Un appears to wield unchallenged authority and the party congress is not a forum for debate. Analysts say it is effectively a coronation for Kim, who, unlike his father, had little time to prepare for another dynastic transfer.

He took power in December 2011 after the sudden death of his father.

Kim has been working since then to assert his authority—purging the party, government and powerful military of those seen as disloyal and ordering the execution of his powerful uncle, and one-time political mentor, Jang Song-Thaek.