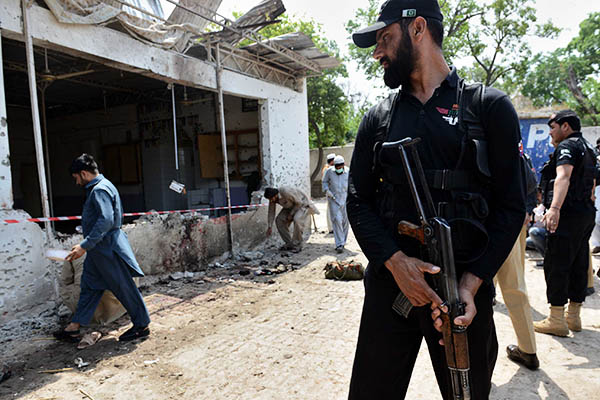 At least three people were killed, including two security forces personnel and one civilian, after the Pakistani Taliban detonated explosives near a checkpost in North Waziristan, the ISPR said on Tuesday.

“A suicide bomber in a car tried to target a checkpost in the Spin Dam area of North Waziristan,” said the military’s media wing. “When [he was] stopped 200 meters from the checkpost, he blew himself up and killed two soldiers on the spot while two others were seriously injured,” said the ISPR. “The [injured] soldiers were shifted to a nearby military hospital,” it added.

“If the car had been allowed to reach the checkpost, we could have faced a lot more casualties,” the ISPR added.

The attack was the first suicide attack attempted by the Taliban since the military launched Operation Zarb-e-Azb against the militants on June 15. At least 300 militants have been killed in ongoing airstrikes and the government has pledged to continue the military operation until all the terrorists in the tribal area have been defeated.

Abu Baseer, a spokesman for Ansar-ul-Mujahideen, one of the Pakistani Taliban factions, claimed responsibility for the suicide attack on security forces.

“I, on behalf of Ansar-ul-Mujahideen, a faction of the Tehreek-e-Taliban Pakistan, accept responsibility of today’s attack on a security forces checkpost in Spin Dam area,” he told Newsweek via telephone from an undisclosed location. “This is the beginning. They will soon feel the heat of Taliban’s attack, not only in North Waziristan, but across Pakistan,” he added.

“Accept responsibility”? How disgusting and vile that such comments have become commonplace. It is amazing to me that any person can take pride in their insane terrorist mentality. The media should *never* give air time or print space to acknowledge these infamy seekers.

The bottom line is that such attacks, cowardly at their core, are not something that humanity should tolerate in the *slightest* bit.