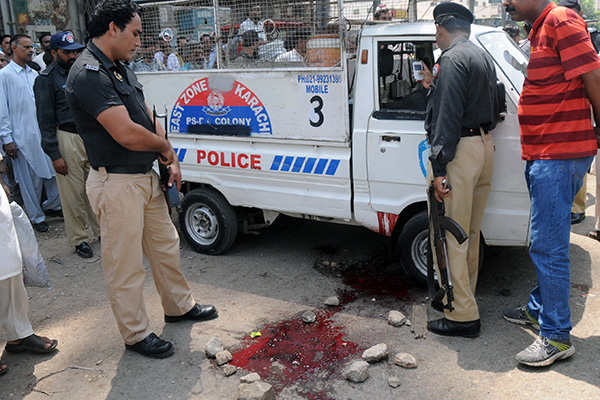 Policemen inspect a police vehicle after an attack in Karachi. Asif Hassan—AFP

Three soldiers were killed and four wounded in separate bomb attacks on military convoys in North Waziristan, while two policemen were gunned down in Karachi.

Two separate bomb attacks in North Waziristan, a bastion of militants linked to the Taliban and Al Qaeda, led to the deaths of the soldiers, according to officials.

“A military convoy comprising 35 vehicles was on its way to the northwestern town of Bannu from Razmak when an improvised explosive device planted along the roadside went off, killing three soldiers,” a local intelligence official said. The official, who requested anonymity, said two soldiers were wounded in the explosion 70 kilometers south of Miranshah. Another two soldiers were wounded in a second bomb attack on a military convoy 20 kilometers east of Miranshah.

North Waziristan is one of seven semiautonomous tribal regions and has been the scene of frequent drone strikes by the United States. The deputy commander of Tehreek-e-Taliban Pakistan, Wali-ur-Rehman, was killed along with at least five others in a drone strike in the region on May 29.

Pakistani troops have been fighting for years against homegrown insurgents in the northwestern tribal belt, but the United States has accused them of not doing enough to crack down on Taliban and other militants who cross the border to fight in Afghanistan.

Separately, in Karachi, four gunmen riding two motorbikes opened fire on a police vehicle in the Patel Para area and killed two policemen on Sunday, according to senior local police official Usman Bajwa. Nobody has so far claimed responsibility. Karachi, a city of 18 million people, has been plagued by murders, kidnappings, and politically-linked violence.