Security Ramped Up in Islamabad for ‘Azadi March’ 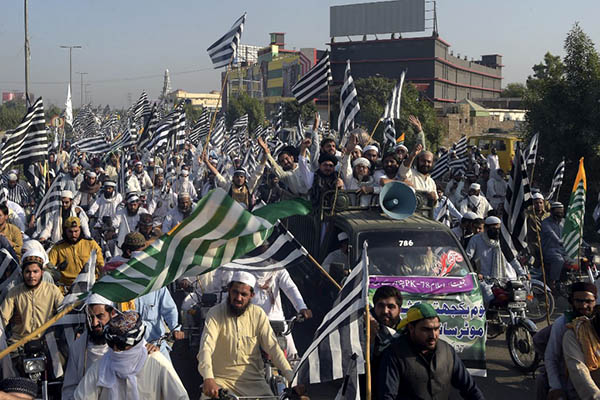 Activists of the Jamiat Ulema-e-Islam in Peshawar wave party flags during the ‘Azadi March’ toward Islamabad. Abdul Majeed—AFP

Islamabad police spokesman says extra police from all over the country has been tasked to protect diplomatic enclave, government buildings

Officials have ordered additional security forces to be deployed to federal capital Islamabad, authorities confirmed on Tuesday, days ahead of the expected arrival of thousands of Islamist protesters calling for the dissolution of the government.

Islamabad police spokesperson Zia Bajwa said extra police forces from across the country were being deployed “at the main entry points” of the capital, adding that security was also being increased around main government buildings and the diplomatic enclave.

The ‘Azadi (Freedom) March’ is being led by Khan’s long-time rival Maulana Fazlur Rehman, who heads the Jamiat Ulema-e-Islam (JUI-F), one of the country’s largest Islamist parties. Rehman has repeatedly claimed that Khan took power following “rigged” polls in 2018, and is calling for fresh elections—but has remained vague about what tactics he and his supporters will use once they arrive in the capital.

“The whole nation has developed a consensus that this is a fake government which doesn’t enjoy the public’s mandate,” Rehman told thousands of demonstrators in Multan on Tuesday.

The cleric is leading tens of thousands of marchers who are descending on the capital from cities across Pakistan and plan to converge in Islamabad on Oct. 31.

Authorities have already begun sealing off the capital’s diplomatic enclave with shipping containers, while efforts to strike a deal with the protesters before they arrive in Islamabad appear to have failed.

Khan has labeled the march as an attempt to “blackmail” his government and dismissed reconciling with Rehman, insisting the cleric has benefited from large-scale graft for years.

All parties, ppp pmln, anp, jui f and that’s the total turnout in lahore. This shit is going to be a maximum of 10k to 20k in Islamabad. Failed rally