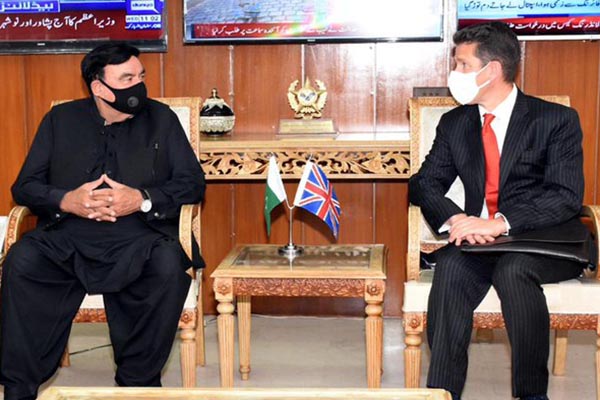 British High Commissioner to Pakistan Christian Turner on Wednesday advised Interior Minister Sheikh Rashid Ahmed to request Nawaz Sharif’s extradition from the British government during a meeting in which matters of mutual interest were discussed.

“I asked British High Commissioner Christian Turner to deport Nawaz Sharif, as he is a fugitive of the court,” Rashid told a press conference in Islamabad. Claiming that they had discussed the issue in depth, he said that the envoy had told him both governments wished to discuss the matter but “he did not give a very positive response.”

The Interior Ministry last year said it would not renew Sharif’s passport, which expired on Feb. 16, under instructions from Prime Minister Imran Khan. Last month, the ministry offered the former prime minister special dispensation if he wished to return to Pakistan but refused to renew his diplomatic passport.

According to a statement issued by the Ministry of Interior, Turner and Rashid reviewed the progress on extradition agreements between Pakistan and the U.K. It said they had both agreed that these accords were in the best interest of their nations, adding that an agreement had been reached to accelerate their introduction and implementation.

During the meeting, Rashid conveyed the concerns of Pakistanis living in the U.K. over Britain’s decision to place Pakistan on a travel ‘red-list’ due to a surge in coronavirus cases. “Pakistanis living in the U.K. are worried about the decision,” he was quoted as saying. “The coronavirus is spreading faster in other countries but putting Pakistan on the red list is discriminatory,” he added.

To this, Turner clarified that Pakistan was not being discriminated against, but rather the decision was prompted by a high number of Pakistanis traveling to the U.K. “Pakistan has the highest number of travelers going to the U.K.,” he said, adding that a lot of travelers from Pakistan to the U.K. had tested positive for the coronavirus upon their arrival.

The two men also discussed Pakistan’s progress on ending its grey-listing by the Financial Action Task Force, with the British ambassador praising Islamabad on having met the majority of the global watchdog’s requirements to curb terror financing and money-laundering.

“The government values the longstanding relationship between the U.K. and Pakistan,” Rashid told Turner and also conveyed his condolences to the British envoy over the demise of Prince Philip, the Duke of Edinburgh.