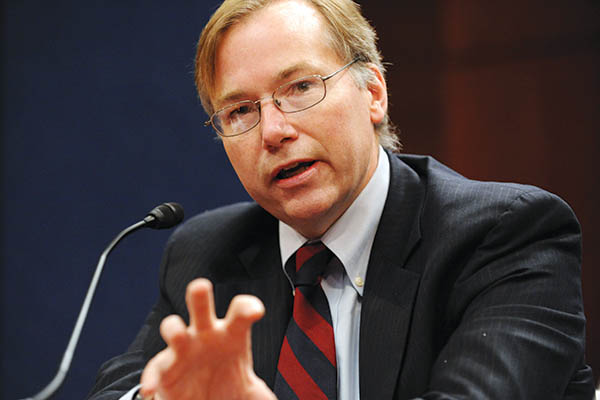 In conversation with journalist and author Steve Coll

Steve Coll is Dean of Columbia University’s Journalism School. He has reported on South Asia since the 1980s. Ghost Wars, his account of the CIA, Osama bin Laden and Afghanistan leading up to 9/11, won the Pulitzer Prize in 2005. Directorate S, published earlier this year, has similarly been widely acclaimed as the authoritative account of the American war in Afghanistan. He sat down with Newsweek Pakistan recently to offer insight on the war on terror’s progress, Donald Trump and much more. Excerpts:

You last spoke to Newsweek Pakistan in 2014, what’s the biggest change you’ve noticed since then?

There are two things that are probably related. The Army has tightened its control over Pakistani society and Pakistani politics even more so than in 2014 and this has had consequences for Pakistani politics and institutions, mostly unfavorable ones. Media has become less free, public discourse has become more constrained, politics is less competitive. The other side of the change is that security has improved. Understandably the Army has prioritized domestic security over Afghan security, but one of the things they’ve done is push the problem into Afghanistan.

There have been multiple allegations that the elections have been influenced by the Army in favor of Imran Khan. What do you make of these allegations?

It’s hard to know exactly how the Army may have intervened to aid Imran Khan on election day but it was clear that they were organizing a path for him to come to power by pressuring members of other parties to support him. That testimony alone gives you the sense of intent. It reminds me of how the Army set up the Muttahida Majlis-e-Amal in 2002 under [then-President Pervez] Musharraf. Some fluffing was necessary on election day but a lot of what was achieved was done beforehand by setting up candidacies and constituencies and building an outcome in advance.

Given that he does seem like the Army’s preferred candidate, will Imran Khan be helpful or a hindrance to peace in Afghanistan?

Imran Khan might be a convenient vehicle for risk-taking, since he can be the visible face of the Army’s political approach, but I think fundamentally the Army has to decide what it wants in Afghanistan. Is it willing to take the risks required to attempt to try and pressure the Taliban into negotiations?

Directorate S is an odd title for a book on the U.S. war in Afghanistan. Can you explain that title to our readers?

Directorate S is the name the Americans gave to the covert action wing of the Inter-Services Intelligence Directorate, the wing that allegedly supported militants in Afghanistan. The CIA and the United States realized after 2006 that the same sanctuary and support that the Taliban enjoyed against NATO forces in Pakistan was eerily repetitious of the strategy the CIA had in fact collaborated with the ISI on against the Soviet occupation of Afghanistan.

The Army and the civilian government have vehemently denied supporting the Taliban. Why shouldn’t we trust the government?

The evidence on the ground is pretty overwhelming. The number of Taliban leaders that have lived unmolested for long periods of time in Pakistan, whether in Quetta or Karachi; the ability that they have demonstrated to convene and provide leadership to the movement; the hospitals that treat Taliban wounded without interference. In the history you can see very carefully sourced accounts of how the Pakistan Army, through the ISI, did demonstrate that it had contact with Taliban leaders. In fact, [former Army chief] General Kayani brought a statement in Mullah Muhammad Omar’s name to a meeting in Brussels and handed it over to then-Secretary of State John Kerry, saying, see we’ve been able to get the Taliban to move in this way.

You’ve been accused in Pakistan of bias and paranoia about ISI’s involvement. How do you respond to that?

A fair reading of the book wouldn’t support that allegation. The title is provocative from a Pakistani point of view and I take responsibility for that, but I do believe that the fullness of the history in the book is a balanced one. The book is quite hard on the Americans. The repetitious failure of decision making in Washington; the illusions that informed the American counter-insurgency project; the fatal distraction of the invasion of Iraq; the unwillingness to adopt a political strategy to complement the military strategy. And certainly there’s plenty in the book about the failure of Afghan leadership as well and the corruption and the self-interestedness that informed the Afghan government too often. I chose that title because it was so central to the discourse about the war as well as the course of the war. And a book needs a title.

You recount allegations by Indian intelligence that the failed 2014 attack on PNS Zulfiqar involved nuclear weapons. Is Pakistan’s nuclear arsenal safe? Do you believe that there were nuclear weapons on the Zulfiqar?

I don’t know whether there were weapons on that ship, as the Indians reported, and they have an interest in raising alarms of this type, but there is no question that the Pakistani nuclear arsenal is becoming more dangerous because of the Pakistan military’s intention to build smaller tactical weapons. And you have both ship-borne and now apparently land-based tactical nuclear weapons that are by their nature more insecure because they have to be forward deployed and they’re smaller in their design.

A political solution in Afghanistan is now broadly accepted as the only solution. What do you make of ‘mainstreaming militancy’ in Pakistan and Afghanistan?

Mainstreaming militancy has been a national policy of the establishment in Pakistan as a way to try to ride the tiger. The social costs in Pakistan have been considerable. This nation with an enormously talented population, a talented diaspora, the potential to continue to grow economically is going to be held back if the country is just fixated on ideological projects that have moved from the fringe to the center of society.

In Afghanistan, the politics of mainstreaming militants feels a little bit different. There is civil conflict that has been fought violently now pretty much continuously since the Soviet invasion and the Taliban are a feature of that conflict. You can imagine a version of something that you see in Pakistan where there are differences between norms in the countryside versus in the cities, that’s true today, and differences between norms in rural Kandahar and urban Mazar. I think the trick is to negotiate something that’s sustainable politically in a constitution rather than worrying about how uniform Afghan society’s norms are.

The last time that negotiations were pretty serious, the Pakistan view—the Army chief’s view—was look let’s build confidence gradually, we do want a federated outcome, we do want the natural political evolution of the south and the east and a balanced Afghanistan but let’s not try and negotiate the whole constitutional arrangement right now. Let’s experiment with ceasefires and with managed politics and build confidence gradually.

The Americans wanted a really big formal constitutional negotiation. And it never really translated. I think that the Afghans were also skeptical about how destabilizing trying to rewrite the constitution might be. And [then-president Hamid] Karzai certainly thought it would come at his expense, which is part of why he blew up the negotiation.

Now the years have passed and so many lives been taken, you certainly see a yearning on the Afghan side for some kind of settlement, and you saw this with the Eid ceasefire and the images of an alternative Afghanistan cascading through the country.

Peace envoy Zalmay Khalilzad talked over the weekend about being ‘cautiously optimistic’ about negotiations. Khalilzad is, with some reason, viewed as anti-Pakistan. Do you think there are reasons to be optimistic?

Well, the American administration is committed to these negotiations in a way that no other has before. Here you have really the most able Republican negotiator available for the Trump administration. And it’s an ironic form of leverage, but everybody knows that President Trump isn’t enthusiastic about the Afghan war. The administration’s military and diplomatic leaders understand the clock is ticking. [On Dec. 20, Trump announced he would be withdrawing a ‘significant’ number of U.S. troops from Afghanistan]

Is the increased bombing campaign part of that, with a 39% jump in civilian casualties reported over the last year? To bring the Taliban to the table?

How sustainable it is to hold on to cities by constantly bombing mixed guerrilla and civilian formations is, I think, pretty uncertain. The worry from a negotiating perspective is that everybody knows the war isn’t going especially well from the Afghan government’s perspective and the Taliban certainly aren’t going backwards. There’s a sense that on the Afghan government and American side that time is of the essence. I’m not sure that sense is shared by the Taliban.

Finally, Trump. Trump’s recent rhetoric on Pakistan has ruffled feathers. It seemed to run completely counter to Khalilzad’s cautious optimism. What was he trying to achieve?

I don’t think that he thinks very deeply before he says these kind of things. He’s gotten a lot of support for pressuring Pakistan, so that probably encourages him to go off script but I don’t think it’s constructive or it makes Khalilzad’s work any easier. The obstacles are heavy enough as it is.