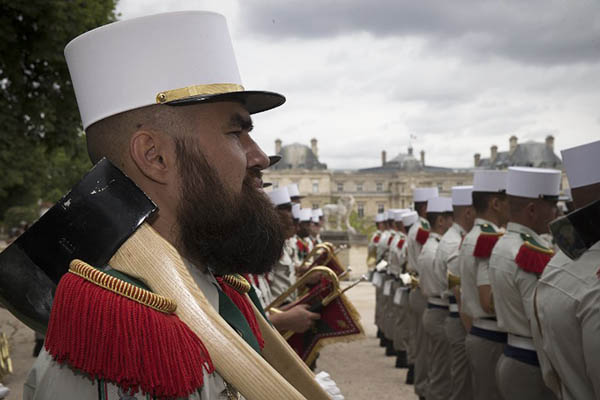 It’s the stuff of legends. An elite force that takes in people from all over the world, erases their troubled pasts and asks them to fight tooth and nail for a country that isn’t theirs. Thousands of potential recruits knock on the door of the French Foreign Legion every year, hoping to join a 6,800-strong force that has fought for France for close to two centuries in conflicts the world over.

“The Legion is one of the best armed forces in the world, a legend. It’s a school of life,” says Gidey, a 24-year-old Ethiopian who is trying his luck at Fort de Nogent near Paris—one of the Legion’s two selection centers.

For one week, Gidey and others will take physical and psychological tests with the hope of one day becoming a member of the elite force, and maybe slow-march down the Champs-Elysees in France’s trademark July 14 national day military parade. “We only accept one in eight. You’ve got to earn it,” says Francois-Xavier Petiteau, in charge of recruitment at the Foreign Legion. “The law allows us to take in illegal migrants. We’re careful though, we need to be able to identify them, and then there is a whole host of checks.”

Established in 1831, the crack corps was set up as a unit for foreign volunteers who could change their identities and turn a page on their past by fighting the enemies of France. The mystique of the adventure-seeking corps was enshrined in Hollywood movies such as Beau Geste and March or Die.

It used to be that wanted criminals could find solace at the Legion, hiding under the white, flat-topped military hat, known as the kepi, that has come to embody the force. But those who committed murders, sex crimes or were involved in drug trafficking are now off-limits.

“When it comes to smaller offences, it depends,” says Petiteau, smiling.

Those who knock on the door of the elite force, aged 17-and-a-half to 40, often have troubled pasts and are searching for redemption, for a second chance or simply for a life of adventure. Take Lawrence Franks, an American soldier with suicidal urges who abandoned his unit to join the Legion, serving for five years under an assumed name before being convicted for desertion in December by the U.S. military.

But before anyone is accepted, the Legion’s investigators meticulously go over a candidate’s past—and sometimes even enroll the help of international police agency Interpol. “It can take a while,” says Petiteau. “Sometimes they tell us: ‘That one, out.’ They don’t say why and we don’t ask.”

After the initial, week-long selection, wannabe legionnaires are sent to Aubagne in the southeast for more tests, and then they move to a base near the southern town of Castelnaudary where they undergo 16 weeks of grueling training. This begins with a largely sleepless month in an isolated farm, where the candidates are closed off from the outside world.

“They are put into a system that will shatter everything from their past life, and overcome all differences in nationalities,” says spokesman Francois Herve-Bazin. The month ends with a long, arduous march come rain or shine, at the end of which they formally enter the Legion and get given the coveted kepi.

“The French flag becomes your flag,” General Philippe Chalmel, who supervises the cap-giving ceremony, tells new recruits. Three more months of training, and the soldiers are ready to go.

Most of those who join, though, do not speak French. In June, a majority of the 70 men who were on their month-long initiation at the Bel Air farm near Castelnaudary were Russian speakers. One of the soldiers-to-be was Mongol and spoke fluent French. “Within 16 weeks, they must know 500 words of French,” says Clement Dutoit, one of the instructors. The legionnaire can get French nationality after five years of service, and less if he is injured.

“I feel that the best thing in the Legion is to give someone the possibility to become French by shedding his blood,” says Chalmel.

Security Agencies Have Warned of Plot to Assassinate...