Seeking the Origins of Life 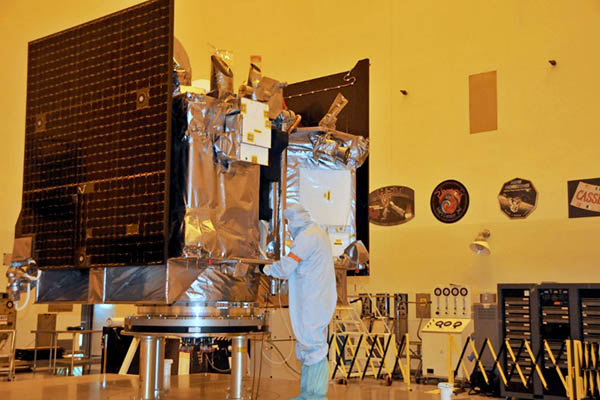 The idea for a device that could unveil the origins of life in our solar system began with a Solo cup. Next month, an invention inspired by that plastic, disposable beverage cup will launch into space aboard the United States’ first robotic mission aimed at scooping up 4.5 billion-year-old dust from an asteroid.

The unmanned spacecraft will travel to an asteroid near Earth called Bennu to collect space dust that may reveal how the materials necessary for life—such as carbon and ice—made their way to our planet.

“We seek samples that date back to the very dawn of our solar system,” said Dante Lauretta, OSIRIS-REx principal investigator with the University of Arizona, Tucson.

Launching Sept. 8 atop an Atlas V rocket from Cape Canaveral Air Force Station in Florida, the 2,087-kilogram sport utility vehicle-sized spaceship is set to embark on a multiyear mission, returning its bounty of space dirt in 2023.

The idea is not to land on the asteroid, but approach closely and “high-five” it for several seconds to gather some debris that can be studied more closely back on Earth. The problem is that in zero gravity, such a device could just scatter dust instead of collecting it.

So, years ago, Lockheed Martin engineer Jim Harris began practicing with a reverse-vacuum concept in his driveway. He placed a plastic Solo cup—pierced with some strategically placed holes—with the rim facing down on the ground. Then he used an air compressor to blow air through the cup’s base.

The dirt it spewed out through the holes was collected in an external container.

Harris first called his creation Muucav, “vacuum” spelled backwards. But the final name is TAGSAM, an acronym for the Touch and Go Sample Acquisition Mechanism.

“Over the past 10 years, it has come a long way from a Solo cup in the driveway to what you see now,” said Rich Kuhns, OSIRIS-REx program manager with Lockheed Martin Space Systems in Denver.

TAGSAM aims to return far more material than a similar mission by the Japanese Aerospace Exploration Agency that launched in 2003. The Hayabusa mission encountered some difficulties, and even crash-landed into the surface of its target, but managed to return just under a milligram of material from the asteroid Itokawa in 2010.

NASA’s spacecraft is designed to collect at least 60 grams, but could get much more. Tests have shown it picks up an average of 300 grams.

The sample will not be taken until July 2020, allowing the spacecraft time to closely study the asteroid so scientists can pick the most promising region, says Gordon Johnston, an OSIRIS-REx program executive at NASA headquarters.

“We will approach Bennu, map it, orbit it, study it and pick the safest and most scientifically interesting place to pick a sample from before going in and attempting the sample,” he told reporters. “Three quarters of the sample will be set aside for future researchers—for the science questions we haven’t figured out to even ask yet.”

NASA has also promised four percent of the sample to its major partner in the effort, Canada, and another half-percent to Japan.

Although the Japanese mission proved that asteroid sampling and return can be done, NASA based much of the OSIRIS-Rex’s design on a previous U.S. mission launched in 1999, called Stardust, which returned cosmic material from a distant comet’s tail. “Stardust told us a lot about comets, which form way in the outer part of the solar system,” Lauretta said. “OSIRIS-Rex is bringing back samples that are closer to home and are probably the likely candidates that delivered these key, prebiotic compounds to our Earth.”

NASA picked Bennu out of 500,000 known asteroids in the solar system because it’s the right size, easy enough to visit, and contains carbon-rich dust from billions of years ago, says Christina Richey, OSIRIS-REx deputy program scientist at NASA. “We are talking about the start of the formation of our solar system,” she said. “Maybe the precursors to life on Earth or elsewhere.”

The space rock is taller than the Eiffel Tower—some 500 yards in diameter—and passes by Earth every six years, orbiting the sun at roughly the same distance as the Earth. “Bennu is currently the best understood asteroid not yet visited by a spacecraft,” Richey said.