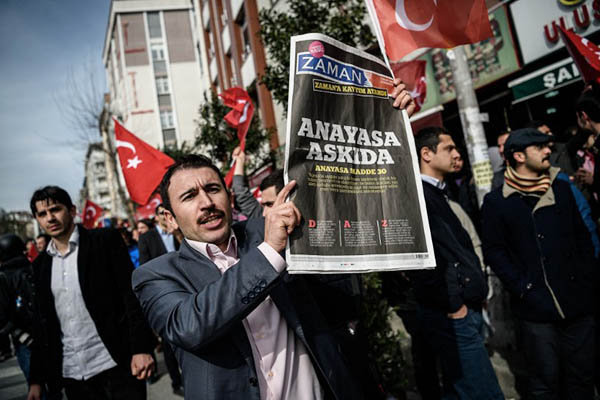 A leading Turkish newspaper that had staunchly opposed President Recep Tayyip Erdogan on Sunday printed its first edition since being taken over by the authorities, with a string of pro-government articles on its front page.

Police on Saturday fired tear gas and rubber bullets at people protesting outside the Istanbul offices of Zaman, as the newspaper warned of the “darkest days” in the history of the Turkish press in its last edition before its takeover on Friday.

Press freedom campaigners have urged the European Union on the eve of a key summit with Turkey not to compromise on fundamental values in return for Ankara’s cooperation in tackling the migrant crisis.

The front page of the paper, normally strongly critical of the president, on Sunday carried a lead story focused on an ambitious $3 billion government project to connect the Asian and European sides of Istanbul by a third bridge. In common with other pro-government newspapers, the front page also contained images of the funerals of “martyrs” killed in military clashes with Kurdish rebels in the southeast.

Another article said the president would host a reception to mark international women’s day with a photograph showing him holding the hand of an elderly woman.

With an estimated circulation of 650,000, the newspaper has been closely affiliated with Erdogan’s enemy, exiled Islamic preacher Fethullah Gulen, believed to wield significant influence in the police and judiciary, as well as media and financial interests. Ankara accuses Gulen of running what it calls the Fethullahist Terror Organization/Parallel State Structure and seeking to overthrow the legitimate Turkish authorities.

Critics said the takeover was aimed at eradicating opposition media in Turkey, which hopes to join the European Union. “The Internet has been cut off, we are unable to use our system,” one of the newspaper’s journalists told AFP. “The Sunday edition was not produced by Zaman’s staff.”

The seizure of the newspaper by the state comes ahead of a critical summit on Monday between Turkey and E.U. leaders in Brussels. The E.U. has urged Ankara, its key ally in tackling the huge migrant crisis facing the continent, to uphold press freedom.

Reporters Without Borders, which ranks Turkey 149th out of 180 countries in its latest World Press Freedom Index, warned the E.U. on the eve of the Brussels summit not to “yield to blackmail regarding migrants.”

“There can be no question of resuming E.U. accession talks while Ankara visibly tramples on basic European values,” Reporters Without Borders secretary-general Christophe Deloire said in a statement. “Until now, the European Union has demonstrated culpable weakness in response to President Recep Tayyip Erdogan’s attacks on the media,” he said, adding that “business as usual” would be incomprehensible after the seizure of the Zaman daily which is “now taking a pro-government line that borders on caricature.”

The news of the court decision to seize the media group broke as Erdogan was holding talks in Istanbul with E.U. President Donald Tusk. “Is the E.U. determined to let itself be humiliated?” Deloire said.

The raid comes amid concerns over freedom of expression under Erdogan’s rule. The opposition Cumhuriyet newspaper’s editor-in-chief Can Dundar and Ankara bureau chief Erdem Gul were released on an order from Turkey’s top court last week after three months in jail on charges of publishing state secrets. They face a trial on March 25.

Almost 2,000 journalists, bloggers and ordinary citizens, including high school students, have also found themselves in court on accusations of insulting Erdogan. The government, for its part, has denied any interference in the Zaman affair, describing the seizure a “legal process.”

“There are many media outlets in Turkey that criticize our government. None of them are subjected to legal procedures,” Davutoglu told A Haber television on Sunday. “But what’s in question here is not merely a press activity but rather an operation targeting a legitimate government that came to power with popular support,” he said, referring to Gulen loyalists.

Gulen has been based in the United States since 1999 when he fled charges against him laid by the former secular authorities.

Turkey has asked the United States to extradite him but Washington has shown little interest in doing so. Davutoglu said talks with the United States were under way “within the frame of international law” for Gulen’s extradition. “I hope we will obtain a result as soon as possible,” he said.