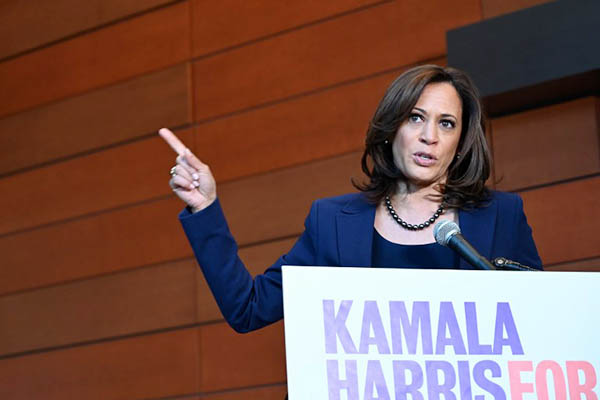 Senator Kamala Harris announced Monday that she is seeking to become the first African-American woman to hold the office of U.S. president, joining an already-crowded field of Democrats lining up to take on Donald Trump.

“The future of our country depends on you and millions of others lifting our voices to fight for our American values. That’s why I’m running for president of the United States,” the senator from California said in a video posted on Twitter.

Harris joins Senator Elizabeth Warren of Massachusetts, Hawaii congresswoman Tulsi Gabbard, New York Senator Kirsten Gillibrand and former housing secretary Julian Castro, among others, either in the race or exploring a run for the 2020 Democratic nomination.

Nearly 22 months before the 2020 election, the battle for the White House is already firming up, as Americans begin to assess who might be the opposition party nominee to challenge Trump for control of the White House.

Harris made the announcement on the national holiday honoring civil rights movement icon Martin Luther King Jr., whom she said her mother met. “I’m honored to be able to make my announcement on the day that we commemorate him,” Harris told ABC’s Good Morning America. “My parents were very active in the civil rights movement and that’s the language that I grew up hearing. And it was about a belief that we are a country that was founded on noble ideals and we are the best of who we are when we fight to achieve those ideals,” she said.

Harris’s calls for unity in her newly published memoir—The Truths We Hold: An American Journey, from Penguin Press—clearly set the tone for what her candidacy might mean in an America sorely divided by Trump’s unsettling presidency. She returned to that theme on Monday in remarks at Howard University in Washington. “There are so many powerful voices who are trying to sow hate and division among us. We have got to reject that. It is not reflective of who we are as Americans, and it is not in our best interest,” she said. “Our unity has always been our strength, and our strength is our unity.”

Harris also took aim at Trump over the partial government shutdown sparked by a feud with Democrats over funding for his border wall project. Trump is “holding the American people hostage over a vanity project that he calls a wall,” she said, terming it “completely irresponsible.”

After two terms as district attorney of San Francisco (2004-2011), Harris was twice elected attorney general of California (2011-2017), becoming the first woman and the first black person to serve as chief law enforcement officer of that populous state. Then in January 2017, she took the oath of office as California’s junior U.S. senator, making her the first woman of South Asian descent (her mother is a Tamil Indian) and only the second black woman senator in American history, after Carol Moseley Braun.

Her focused and often tough-sounding lines of questioning during closely watched Senate hearings reflect her past as a prosecutor. Harris often proudly recalls that as a prosecutor she fought big banks during the 2008 financial crisis.

She casts herself as a champion of middle class families “living paycheck to paycheck” and denounces police brutality and the killing of unarmed black men.

The daughter of immigrants—her father is from Jamaica—Harris grew up in the 1960s in the progressive hotbed of Oakland, California, proud of the struggle her parents waged for civil rights. “My mother was the strongest person I have ever known,” she has written on Twitter. Mother Shyamala was only 19 when she came to the United States in 1960 to pursue her studies in California, eventually becoming a renowned cancer researcher.

After her parents separated when she was about five years old, it was Kamala’s mother who raised her and her younger sister, Maya, who went on to become a lawyer and an adviser to Hillary Clinton during the 2016 presidential campaign.

Hers was a happy childhood, Harris now says, where education was highly valued. But Harris has also experienced discrimination. “I have too many memories of my brilliant mother being treated as though she were dumb because of her accent,” she wrote in her autobiography.

Asked about that, she shared some tough words about Republican President Trump. “There are powerful forces—including this president—that are attempting to vilify immigrants because they were born in another country,” she said recently on CNN.