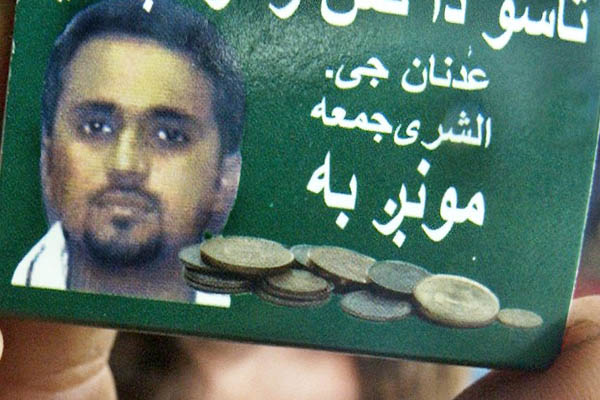 A matchbox with a picture of Adnan El Shukrijumah. Tariq Mahmood—AFP

Military claims five terrorists were arrested in the raid that also resulted in the death of Adnan El Shukrijumah’s local facilitator.

The Pakistan Army said Saturday it had killed a senior Al Qaeda leader wanted by the U.S. over a 2009 plot to attack the New York subway system.

“In an intelligence borne operation top Al Qaeda leader Adnan El Shukrijumah was killed by Pakistan Army in an early morning raid in Shinwarsak, South Waziristan today,” the military said in a statement.

Shukrijumah, one of the FBI’s most wanted terrorists, was hiding in a compound in Shinwarsak after fleeing from neighboring North Waziristan tribal district where the Army launched Operation Zarb-e-Azb against militant bases in June, the military said. “His accomplice and local facilitator were also killed in the raid,” it said.

Saudi-born Shukrijumah is described by the FBI as “one of the leaders of Al Qaeda’s external operations program” and is wanted in connection with the attempt to blow up the New York subway, as well as for plots connected to targets in the United Kingdom. There had been a $5 million reward available for information leading to his arrest.

ISPR spokesman Maj. Gen. Asim Bajwa said in a tweet that five “terrorists” were also arrested during the raid. One soldier was also killed in the raid, while another was critically injured, according to reports.

The semi-autonomous tribal areas that border Afghanistan have for years been a hideout for Islamist militants of all stripes, including Al Qaeda and the homegrown Tehreek-e-Taliban Pakistan (TTP), as well as foreign fighters such as Uzbeks and Uighurs. Washington pressed Islamabad for years to wipe out the sanctuaries in North Waziristan, which militants have used to launch attacks on NATO forces in Afghanistan.