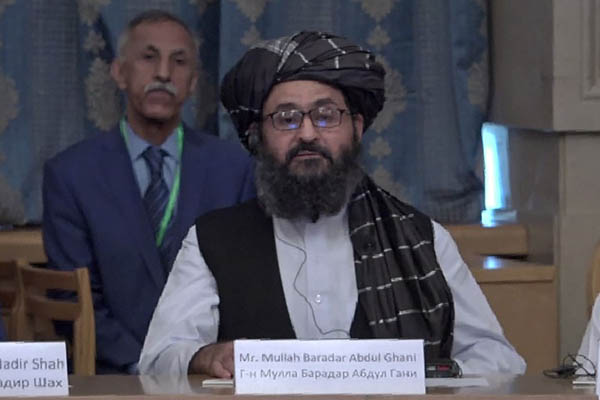 Senior Taliban officials including the group’s top political adviser met with Afghan political figures in Moscow on Tuesday, saying they were committed to peace in Afghanistan—even as U.S.-led talks appear to have stalled.

In a message the Taliban have not altered since talks with the U.S. started last autumn, Taliban co-founder and political leader Mullah Abdul Ghani Baradar said the insurgents want an end to 18 years of conflict—but would only sign a deal after foreign forces quit Afghanistan.

The Taliban are “really committed to peace, but think the obstacle for peace should be removed first,” Baradar said in a rare televised appearance at the start of the two-day meeting marking 100 years of diplomatic ties between Russia and Afghanistan. “The obstacle is the occupation of Afghanistan, and that should end,” Baradar added.

Baradar—who helped Mullah Omar found the Taliban—was appointed its political chief in January following his release from a Pakistan prison.

Tuesday’s Moscow meeting once again cut out senior members of President Ashraf Ghani’s government, which the Taliban consider a U.S.-backed puppet regime, though the head of the Kabul administration’s high peace council had been slated to attend.

The talks mark the second time Taliban leaders have met with Afghan figures in Russia, following a February summit that saw the former foes praying together and chatting over meals. Former warlord Atta Muhammad Noor said the previous Moscow meeting had yielded “quite positive results.”

“We are for having good relations with our brothers, with the Taliban,” Noor said. “Let’s step back a little, embrace each other and create conditions for the start of peace.”

Moscow appears to be gaining influence in the ongoing process, with the U.S. announcing last month that Washington had reached a consensus with China and Russia on the key formula for a peace deal it is negotiating in Afghanistan. But a recent sixth round of talks between U.S. peace envoy Zalmay Khalilzad and the Taliban ended in Doha this month with no tangible progress cited by the negotiating teams.

While the Taliban insist foreign forces must leave Afghanistan before it can agree to peace, the U.S. has refused to agree to a withdrawal until the Taliban put in place security guarantees, a ceasefire, and other commitments including an “intra-Afghan” dialogue with the Kabul government and other Afghan representatives.

Russian Foreign Minister Sergei Lavrov, who opened Tuesday’s meeting, said Russia and Afghanistan have “a shared aim—fighting terrorism” and reiterated that Moscow supports a complete withdrawal of foreign forces. The Soviet Union and Afghanistan fought a war in the 1980s that resulted in a Moscow’s withdrawal after nine years of brutal conflict.