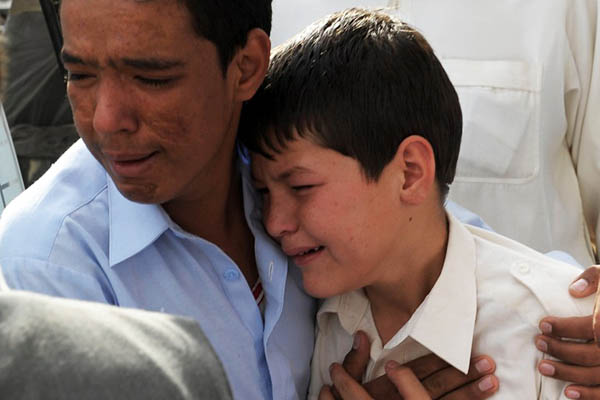 At least 11 people were killed and 30 injured in a series of attacks in Quetta on Thursday, including a suicide bombing at a rally by a leading religious political party.

Maulana Fazlur Rehman, head of the Jamiat Ulema-e-Islam Fazl (JUIF) party was leaving a rally in the capital of Balochistan province—where he had addressed thousands of people—when his car was targeted by a suicide bomber, officials said.

Abdul Razaq Cheema, the city’s police chief, said: “It was a suicide attack. One person has been killed and more than 17 injured. Some of the injured are in critical condition.”

Rehman, who leads the biggest religious party in Parliament, said he believed he was the target. “I was in a bulletproof car and that’s why I survived. There is blood and human flesh on my car,” he told the Geo News TV channel.

Provincial police chief Amlesh khan said the bomber had failed to get into the rally venue “so hit the vehicle outside.”

No group immediately claimed responsibility for the attack, but Rehman and his party have been targeted by the Pakistani Taliban in the past, even though he once acted as a negotiator between the militants and the government.

A bombing at a JUIF election rally in May 2013 killed more than 20 people, while the leader was targeted twice in as many days by bombings in 2011.

Earlier, gunmen opened fire on a bus carrying Shia Muslims at a fruit and vegetable bazaar on the outskirts of the city, killing eight people just days ahead of the holy month of Muharram. “At least nine Hazara Shias were sitting in a minibus after buying vegetables when two gunmen opened fire on them with automatic weapons, killing eight of them and wounding another one,” said senior local police official Imran Qureshi. City police chief Cheema also confirmed the incident and casualties.

A rescue worker at the site said the blood-soaked dead bodies had fallen on top of each other, many struck by bullets to the head. They were later moved to an area hospital.

The Islamic month of Muharram, considered particularly holy for Shias, is due to begin on Saturday or Sunday depending on the sighting of the new moon. The month has frequently been marred by violence in recent years. Clashes between Sunnis and Shias led to at least 11 deaths in Rawalpindi last November.

Ethnic Hazaras have taken the brunt of rising sectarian violence in Balochistan in recent years. They are often singled out for attack because their Central Asian features make them easily identifiable. The Human Rights Commission of Pakistan said last week that as many as 200,000 Hazaras had fled the province over the past 10 years, either relocating in the country’s major cities or seeking asylum abroad.

At least 24 Hazara pilgrims were killed in June when their bus was targeted by suicide bombers. Two devastating bombings in Quetta targeting the city’s Shias killed nearly 200 people last year and were claimed by militant group Lashkar-e-Jhangvi, which has links to Al Qaeda.

Hours after the market attack, a bomb targeted a convoy of the government paramilitary Frontier Corps (F.C.) in Quetta, killing two passersby and injuring 12 others. “This bomb was planted in a motorcycle parked on the Qambrani road,” Cheema said. An F.C. spokesman and a police surgeon confirmed the attack and casualties.

Around 1,000 Shias have been killed in the past two years in Pakistan, a heavy toll on the community that makes up roughly 20 percent of the country’s 180 million-strong population, most of whom are Muslim. Officials said Thursday’s attacks could have been in response to the ongoing military operation against militant groups in North Waziristan tribal district along the Afghan border.