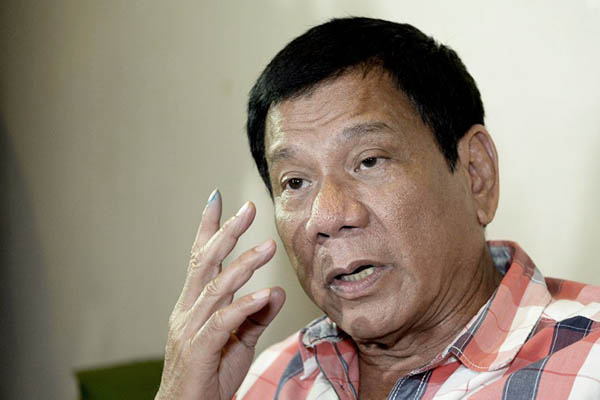 Duterte has been condemned in the West for the crackdown, which has claimed thousands of lives since he took power last year, but he is expected to enjoy the support of most of his guests as he hosts the heads of the 10-member Association of Southeast Asian Nations (ASEAN).

This is partly because the leaders of most other countries in the region have few democratic credentials themselves, or have human rights clouds hanging over them, according to Phil Robertson, deputy director of Human Rights Watch’s Asia division. “Human rights is in a precipitous downward spiral in every ASEAN country except perhaps Myanmar, and that’s only because military rule in that country was so horrible for so long,” Robertson told AFP. “By just about every measure—freedom of expression and peaceful protest, religious tolerance, non-interference in civil society, respect for democratic principles, fair treatment of refugees and migrants—the region is falling deeper into dictatorship, repression, and rights abuse.”

Amnesty International called on the ASEAN leaders to consider whether the drug war killings were a “serious breach” of the provision in the group’s charter to protect human rights. Here are the leaders of ASEAN nations and issues surrounding their rule:

Sultan Hassanal Bolkiah, 70, is one of the world’s richest men thanks to his 49-year absolute rule over tiny, oil-rich Brunei. He caused controversy in 2014 when he introduced sharia law, which on paper includes severing of limbs and death by stoning.

A former Khmer Rouge soldier who defected from the brutal regime, Hun Sen, 64, has been in power for more than three decades. The shrewd politician claims to have brought stability to an impoverished nation ravaged by war. But he is also regarded as a strongman who has leveraged control over the country’s security forces, judiciary and economy to block any challenges to his rule, while allowing corruption and rights abuses to flourish.

Joko Widodo, 55, is the first elected leader from outside the political and military elites. His 2014 presidential victory was seen as a sign that Indonesia’s democratic institutions were in good health, after emerging from three decades of iron-fisted rule under dictator Suharto in 1998. But he has struggled to push through reforms in a country still dominated by figures from the Suharto era and analysts say old establishment forces may be moving to retake power.

Thongloun Sisoulith, 71, rose to the premiership last year after serving as the communist state’s top diplomat. He has trumpeted an anti-graft campaign in the impoverished nation. But scrutiny of his opaque administration remains all but impossible under a regime that bars international media and brooks no dissent.

Najib Razak, 63, has since 2009 been leader of Malaysia’s ruling coalition, which in nearly six-decades in power has overseen rapid economic growth. But its policies favor the Malay majority and it has long been accused of repressing dissent. With elections due next year, Najib has cracked down on his opponents and sacked critics within his party.

Aung San Suu Kyi’s reputation as a democracy icon and human rights defender has been tarnished by her first year in office. The 71-year-old has alienated many of her international backers for not speaking out against a bloody army crackdown on Rohingya Muslims. At home, poor progress on legal and economic reforms, a stalling peace process and a surge in online defamation cases have left many disillusioned with Myanmar’s first civilian government in generations.

A crackdown on drugs that has claimed thousands of lives has been the defining theme of Duterte’s first year in office. Human rights groups warn he may be orchestrating a crime against humanity. But the 72-year-old lawyer insists he is “happy to slaughter” millions of addicts to end the drug menace, and that he does not care about the criticism.

Prime Minister Lee Hsien Loong, 65, the elder son of late founding father Lee Kuan Yew, has led the affluent city-state since 2004. His People’s Action Party was in 2015 returned to power in a landslide election win, extending the party’s uninterrupted rule spanning nearly six decades. But rights groups have criticized the government for clamping down on political freedoms.

Prayut Chan-O-Cha, a 63-year-old career soldier who toppled an elected government while army chief in 2014, heads a junta that has clamped down on dissent and stripped Thais of political rights. The ultra-royalist has promised an eventual return to democracy, but the dates for polls keep slipping and critics say the new junta-drafted charter will solidify the army’s role in government.

Prime Minister Nguyen Xuan Phuc, elected last year by the rubber-stamp parliament, is seen as a competent technocrat and a sturdy apparatchik in the conservative communist leadership. The party has little tolerance for internal dissent and routinely jails critics.