by AFP and Newsweek Pakistan January 9, 2015 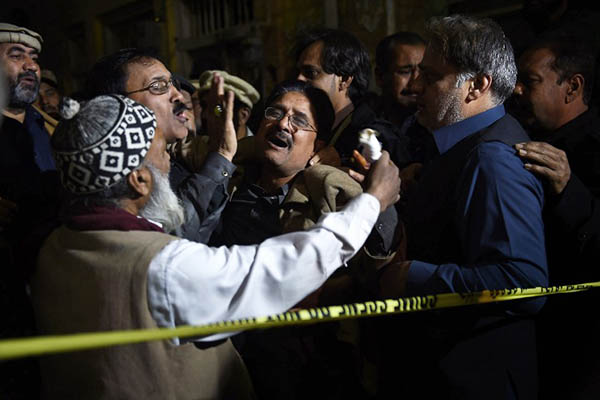 A suicide bomber struck an imambargah in Rawalpindi on Friday, killing at least seven people and wounding 18 others, with police warning that the toll may rise.

The powerful explosion, claimed by the Jamaat-ul-Ahrar militant group, blew out windows and triggered chaos as dozens of minority Shia Muslims gathered at the imambargah to distribute alms to mark the birthday of Islam’s Prophet.

The dead and wounded were wheeled out on carts through the narrow lanes, with security officials cordoning off the area to facilitate access for relief workers. “I can confirm death of seven people and injuries to 15 others. This number may go up,” said senior administration official Sajid Zafar Dall. “There were 100 to 150 people in the mosque at the time of attack,” he added.

Another official at the scene said the casualties included policemen guarding the mosque, adding that the wounded had been sent to various hospitals in the city. “I can see complete chaos … There are dead bodies and injured people inside the mosque,” said Muhammad Salim, a local police official. “The nature of explosion is immediately unclear but it may be a suicide attack,” he said.

The head of the mosque, Shamim Syed, reported seeing the suicide bomber. “There were security arrangements in place outside the mosque. A suicide bomber tried to enter the mosque and he was countered by police and our scouts. He then exploded himself,” Syed told reporters.

Eyewitnesses said the resulting explosion was strong enough to shatter glass windows. “There was a huge bang,” one eyewitness, Sadia Widad, told AFP from the scene. “The injured are being taken out of the mosque on carts because ambulances are unable to enter the narrow street. Lights went out due to power breakdown soon after the blast,” she added.

The Jamaat-ul-Ahrar faction of the Tehreek-e-Taliban Pakistan claimed responsibility for the attack in a statement issued to Pakistani media. Ehsanullah Ehsan, the spokesman of the group, also warned of further attacks. “We want to let the government know that we will not be intimidated by any [new] laws or executions,” he added, in a reference to the government’s decision to end its moratorium on the death penalty and establish military courts to try terror cases.