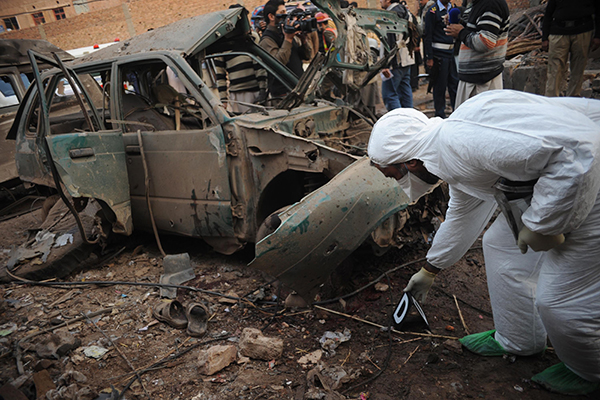 Peshawar bombing is the 30th terrorist attack in Pakistan this year.

Seven people, including two children, were killed and six others were injured in a car bombing in Peshawar’s Scheme Chowk on Thursday afternoon.

Senior police official Najeeb Ur Rehman said the source of the deadly bombing was “an explosives-laden car parked at a workshop.” He said “around 25 to 30 kilograms of explosives and artillery shells were used in the blast.”

But it is unclear whether the car blew up at its intended target. Another police officer said there is a possibility that the “militants were either fitting the explosives inside the white Suzuki Alto or they came to the workshop for repairs.”

No one has so far claimed responsibility for the blast.

This is the 30th terrorist attack in Pakistan in the 23 days of 2014 so far. The Peshawar blast follows a recent surge in Taliban activity and the Pakistani military’s retaliatory aerial bombardment of suspected Taliban hideouts in the federally-administered tribal areas.

President Mamnoon Hussain has condemned the Peshawar bombing and called upon “concerned [authorities] to ensure provision of the best medical assistance to the injured.”

Update: According to the latest information from police sources, the white Suzuki Alto that exploded at the workshop in Scheme Chowk had been discovered abandoned along a roadside a couple of days ago. Police impounded the vehicle, which was to be processed by the bomb-disposal squad. However, a police officer, who also owns a Suzuki Alto, took the impounded vehicle to the workshop to have it cannibalized for his own vehicle. The car was never scanned for explosives.