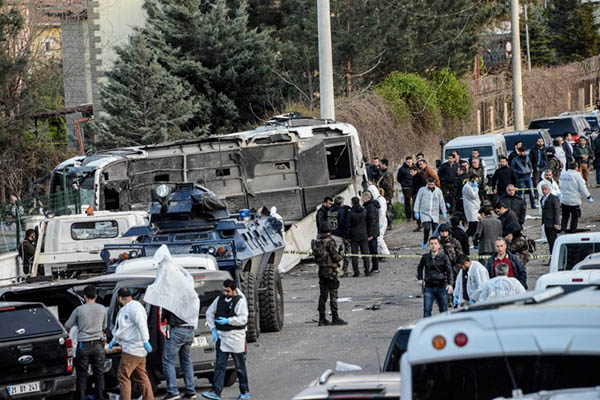 Seven Turkish police officers were killed and at least 27 people wounded on Thursday in a bomb attack on their vehicle in the Kurdish-majority southeastern city of Diyarbakir that President Recep Tayyip Erdogan warned should show the world the “true face” of terror in the country.

The attack blamed on Kurdish militants took place on the eve of a rare visit by Prime Minister Ahmet Davutoglu, whose government has waged a relentless campaign against Kurdish rebels since last summer, to central Diyarbakir on Friday.

Speaking to AFP, a regional security source said a remotely operated car bomb went off as a police vehicle drove past the city’s main bus terminal. Of the 27 wounded, 14 were civilians and 13 police.

President Recep Tayyip Erdogan, in Washington on a hugely sensitive visit to the United States, confirmed the death toll and said the attack showed the world the true nature of the outlawed Kurdistan Workers Party (PKK). “We cannot tolerate this any more. European countries and other countries, I hope they can see the true face of terrorists in these attacks,” he said.

Erdogan has been infuriated in recent months by U.S. backing of Kurdish militias in Syria which Ankara see as the Syrian branch of the PKK and has claimed some E.U. states tolerate the group on their territory. He argued that the Kurdish rebels are as dangerous as the fighters of the Islamic State group, which has become the West’s main target in Syria.

Erdogan told his audience at the Brookings Institution think tank—where Turkish security and pro-Kurdish protesters clashed ahead of his speech—that the whole world must come together to fight terror.

Ambulances rushed to the scene of the blast in Diyarbakir, where images showed the police bus reduced to a burnt-out wreck by the force of the explosion.

Meanwhile, all the windows from a nearby multi-story building were blown out by the force of the blast, an AFP correspondent said.

Turkish forces have been engaged in an ongoing operation against rebels from the outlawed PKK in the region that has resulted in ferocious clashes and heavy casualties on both sides. The new upsurge of violence between the security forces and Kurdish rebels erupted in July 2015, shattering a two-and-a-half year truce.

Erdogan said this week that 355 members of the security forces had been killed in the fighting, along with 5,359 members of the PKK. It was not possible to confirm the toll on the rebel side. Over 40,000 people have been killed since the PKK took up arms in 1984 demanding a homeland for Turkey’s biggest minority. Since then, the group has pared back its demands to focus on cultural rights and a measure of autonomy.

A radical PKK offshoot, the Kurdistan Freedom Falcons (TAK), claimed responsibility for two suicide car bombings in Ankara this year that left dozens dead. Some analysts believe members of the TAK broke away from the PKK after growing disenchanted with the group and demanding even more radical actions.

Turkish air force planes have bombed PKK hideouts in mountains across the border in northern Iraq as well as in remote areas of southeast Turkey. Ankara has vowed to smash the PKK, and authorities have imposed curfews in several towns in the region because of the fierce clashes.

Kurdish activists have accused the government of masking the extent of the civilian toll from the fighting and also vastly exaggerating the PKK losses. The government denies the claims, saying the operations were an essential move against the PKK, which had put up barricades and dug trenches in a bid to take over Turkish urban centers.

In more bloodshed, two children aged four and six were killed in the Kurdish-dominated southern town of Cizre by explosives they had found lying in the street.