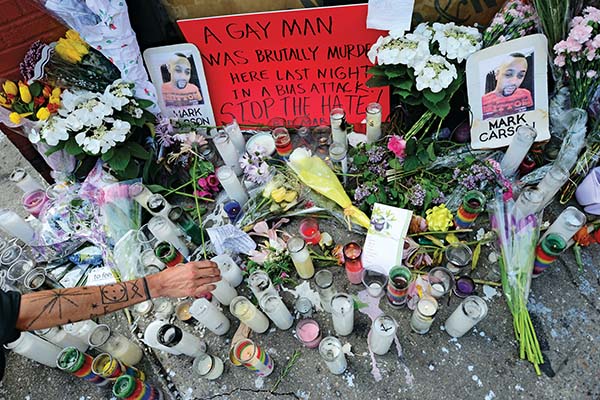 Is New York City dangerous for gays and lesbians?

After Mark Carson was shot and killed in an apparent antigay hate crime while walking with a friend in downtown Manhattan on May 18—in a neighborhood just a few blocks from the Stonewall Inn where riots in 1969 gave birth to the gay-rights movement, on a street lined with gay bars and clubs flying rainbow flags in their windows, along an avenue where the massive annual Gay Pride March will proceed on June 30—New Yorkers were shocked. They shouldn’t have been.

According to LGBT activists, who organized a rally that drew thousands at the corner where Carson was killed, the killing is part of a disturbing rise in deadly anti-LGBT hate crimes, both in New York City and nationally.

In its last set of collected data, covering calendar year 2011 and released late last year, the FBI found that antigay hate crimes were the second-most prevalent type of hate crime, after crimes based on race. But while trend lines for race-based crimes are heading downward, for sexual orientation, the rates are increasing. According to the Anti-Violence Project (a national anti-LGBT violence coalition), 87 percent of the victims of anti-LGBT homicides were people of color and 40 percent were transgender women. Young people were two and a half times more likely to face physical violence than LGBT people over 30.

While the problem seems to be showing a modest rise nation­wide, in New York City—long considered a safe haven for the gay community—it is dramatically worse. There, violence against LGBT people has been on the rise for three years and counting. In 2011 hate crimes against the LGBT community were up 13 percent from 2010, when they increased 11 percent from the previous year. Carson’s homicide was the fifth antigay hate crime committed in Manhattan alone in three weeks.

And the crimes appear to have become increasingly violent, according to data collected by the Human Rights Campaign and Anti-Violence Project. While hate crimes are often associated with a slur or even a punch, experts say anti-LGBT violence is increasingly resulting in not just black eyes but in murders. Thirty people were murdered in antigay hate crimes across the country in 2011, the last year for which data is available. That’s the highest number ever recorded by the Anti-Violence Project in 15 years.