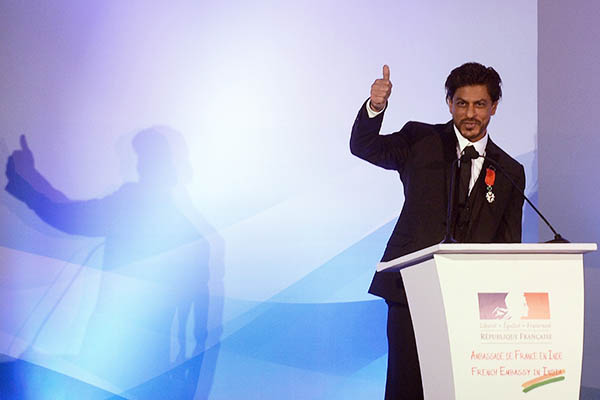 Bollywood actor honored as Knight of the Legion of Honor at ceremony in Mumbai.

Bollywood superstar Shah Rukh Khan was on Tuesday bestowed with France’s highest civilian award for his contribution to cinema.

The actor was honored as a “Knight of the Legion of Honor” by French foreign minister Laurent Fabius at the Taj Mahal Palace hotel in Mumbai.

“There are different moments in life that make you feel that you are on the right track. This is one such moment,” said Khan, 48, one of Indian cinema’s most recognizable faces. Fabius said the French people hailed the actor’s “talent and generosity, which arouse the enthusiasm of a vast audience across the world, transcending cultural and historical differences and bringing together people from all walks of life to his films.”

In a career spanning three decades, Khan has made himself the biggest box office draw in Bollywood as the hero of romantic dramas and high-octane action movies. Fellow Indian superstar Amitabh Bachchan received the French award in 2007.