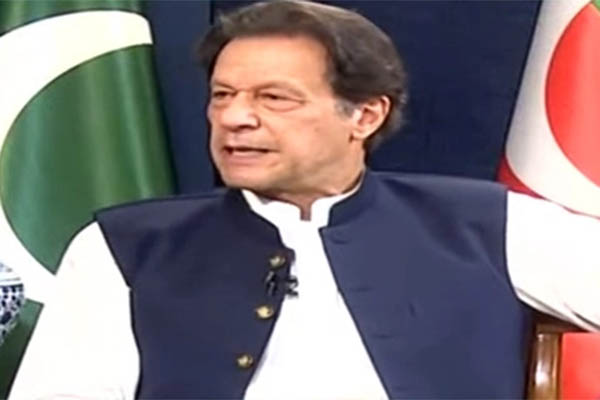 Pakistan Tehreek-e-Insaf (PTI) Chairman seemed to differ from his party spokesman Chaudhry Fawad Hussain on Monday, as he distanced himself from the controversial remarks voiced by his chief of staff, Shahbaz Gill, during a broadcast on ARY News earlier this month.

Gill was arrested last week in Islamabad after he provided a statement to ARY News that authorities say amounts to inciting mutiny within the armed forces. Earlier on Monday, Fawad told journalists that Gill had been targeted because he was “weak,” and the PTI fully supported him. Condemning “police torture” on Gill, Fawad described the case against the chief of staff as the “height of injustice” and vowed to raise the issue “globally.”

By contrast, Khan told journalist Fereeha Idrees later in the day that Gill should not have issued his statement. “He [Gill] shouldn’t have said it because it falls under instigating the Army … it is completely right … we want to see Army as a strong institution,” he said, while claiming that similar statements had been given by ruling coalition leaders Maulana Fazlur Rehman, Maryam Nawaz, Ayaz Sadiq, Nawaz Sharif and others without any legal action.

Stressing that he was upset about the treatment Gill had received in prison, he claimed—without any evidence—that his chief of staff had been stripped and beaten up by police. “They are torturing and trying to mentally break him. And they are forcing him to give statements against Imran Khan,” he alleged, adding that if he wished to say anything, he would say so himself and didn’t need Gill.

The ousted prime minister went on to allege Gill’s arrest was meant to scare PTI supporters and create an “impression” that the PTI was against the armed forces. Claiming this was a plan hatched by the prime minister’s cell, he alleged the closure of ARY News was also part of the conspiracy. “Their aim is to make a treason case against us and create misunderstanding between the Army and PTI because we are the only party that represents all of the provinces,” he said.

Claiming his life was in danger, he said he had recorded a “tell-all” video that would be released if anything were to happen to him. To a question, he said the PTI could undertake another long march on Islamabad to oust the incumbent government, adding the people were his strength.

Stressing that economic stability was linked to political stability, he claimed the economy was in dire straits and the Army chief was contacting foreign countries for help. To another question, he claimed that his relationship with the military leadership had not deteriorated, but admitted that there had been issues with his desire to retain Lt. Gen. Faiz Hameed as chief of the ISI through the winter. “Our strength was that we were on the same page,” he said, adding that PPP’s Asif Ali Zardari and PMLN’s Nawaz Sharif had repeatedly clashed with the Army during their tenures in power. He also reiterated that he had no opinion on the appointment of the next Army chief.

Claiming his government had not been involved in the harassment of press during its tenure, he said “I can’t say who was involved.” However, he claimed, his government always acted to get released anyone who was illegally detained.

Referring to an earlier statement in which he described the appointment of Chief Election Commissioner Sikandar Sultan Raja as one of his greatest mistakes, he said it had only happened because of a standoff between the PTI and the opposition. He also slammed the incumbent government for seeking to oust his government because of high inflation, but failing to curb it after assuming power.

To another question, the PTI chairman said he would hold local elections immediately if the PTI returned to power. He said he had decided to make his party more democratic through elections, adding he was confident the PTI would sweep polls even if they were held a year from now.

This former PM has very little to show for his time in office. His words ring hollow.