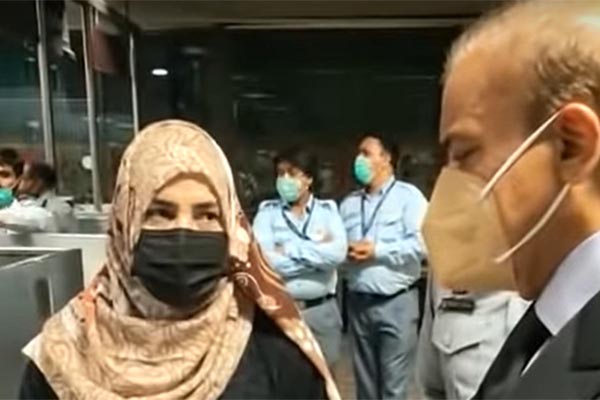 Upon reaching airport, PMLN leader informed his name has not yet been removed from ‘blacklist’ despite court orders granting him one-time permission

Pakistan Muslim League (Nawaz) President Shahbaz Sharif early on Saturday morning was barred from flying out of the country after being informed by immigration officials that his name had not yet been removed from a blacklist as ordered by the Lahore High Court.

On Friday, the LHC had granted Sharif a special “one-time” permission to fly to London to seek medical treatment from May 8-July 3. The court ordered the government to remove Sharif’s name from a “blacklist” that had barred him from foreign travel and directed him to ensure he returned within the timeframe allotted.

After Sharif was refused entry to the flight, he spent some time trying to convince FIA officials that it was his right under court orders but was rejected. He returned to his Lahore home 1.5 hours after arriving at the airport.

PMLN spokesperson Marriyum Aurangzeb told media that Federal Investigation Agency officials had stopped Sharif, adding that he had been told the system had not yet been updated in violation of court orders. Slamming the Pakistan Tehreek-e-Insaf government’s “malafide” intent, she referred to earlier statements by government officials as proof that they were violating the LHC ruling.

On Friday evening, Information Minister Fawad Chaudhry and Adviser to the P.M. on Accountability Shahzad Akbar both told media outlets that they were “surprised” by the order, adding that they would utilize all possible legal means to prevent Sharif from leaving the country.

Alleging that Akbar had carried out Prime Minister Imran Khan’s instructions to prevent Sharif’s exit, the PMLN spokesperson termed it a direct violation of court orders. “This is tantamount to contempt of court and we are holding legal discussions on this,” she added.

“Shahbaz Sharif’s name was not on the ECL [Exit Control List] after which NAB went to the Supreme Court to get [his] name put on the ECL but was rejected,” said PMLN leader Attaullah Tarar, adding that the government had subsequently placed him on a blacklist. “There is a list called the ‘person-not-in-list,’ which is illegal and a dirty tactic through which a person can be temporarily stopped from flying abroad,” he said, claiming that the government was violating court orders by preventing Sharif’s exit through this list.

“It is the government’s job to implement court orders. A deputy attorney general was present in court. How long can you stop [Sharif]? We have the orders and we will get them implemented,” he said.

Sharif will fly abroad in a day or two regardless, claimed Aurangzeb, adding that the government’s moves just proved its intent to victimize political opponents.