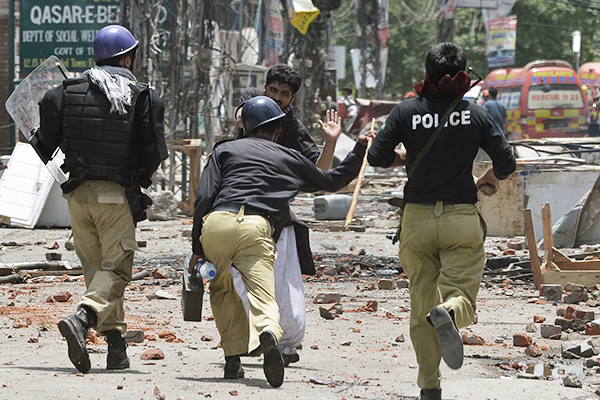 April may be the cruelest month, as the Eliotian cliché goes, but it is Junius Horribilis that Punjab’s Chief Minister Shahbaz Sharif should be concerned about.

On June 17, the ostensibly anti-encroachment operation in Lahore’s Model Town Extension went horribly, tragically wrong. The timing couldn’t have been worse. The Punjab government’s move to remove barriers outside the Pakistan Awami Tehreek’s secretariat came two days after the Army announced its campaign in the North Waziristan tribal agency and six days before the homecoming of Dr. Tahir-ul-Qadri, the Canada-based and anti-Taliban cleric who leads the PAT. When the hours-long operation was over, at least nine Qadri supporters had been killed. Another 80 or so were wounded, at least 39 of them from police bullets.

PAT maintains the barriers were sanctioned by a court and legal, the Punjab government says otherwise. Either way, the Punjab government, through its June 17 actions-gone-wrong, gave Qadri a cause. Otherwise, the cleric who generally remote-controls his devotees wasn’t expected to make too much of a mark today. But the revolution-threatening Qadri was viewed as a threat, and, in the first week of June, the Punjab government began reviewing options to deal with his arrival. The proposals included deporting him, arresting him, or framing money laundering and tax evasion charges against him. The option that the government settled on was to demolish the barriers at Qadri’s secretariat.

Anti-encroachment operations come under the jurisdiction of the Lahore Development Authority. The director-general of LDA, though, has washed his hands off of this saga and told the inquiry commission that the event did not relate to him. The normal procedure would have been to serve Qadri’s administration a notice and then get the courts involved. But the government wanted to put the fear of God in Qadri & Co.

Police had advised against the plan. They cautioned that this could lead to a clash with Qadri’s crowd and become messy. Lahore’s Capital City Police Officer Shafiq Gujjar and Senior Superintendent of Police Operations Rana Jabbar opposed the operation; separately, they also mentioned the political consequences of removing the barriers. But the government would have none of that. Result: the insisters won, the resistors lost. In this there’s lesson, again, for not just reforming the bureaucracy but also the police. Since there is no security of tenure, police officers can be bludgeoned into falling in line. Most do because no one wants to lose a posting in Lahore. Here are some facts to consider:

1: The police officers went into the operation reluctantly.

2: They cannot be absolved of the responsibility of allowing the situation to pan out as it did.

3: The first three attempts by the police to remove the barriers were thwarted by PAT workers who attacked the police with bricks, stones—and, reportedly, petrol bombs and gunfire.

4: While the killing and injuring of people is simply not condonable, it remains to be seen whether these people fell to direct fire from the police or were caught in the reported crossfire between the police and the PAT workers said to be firing from the roof of their building. The forensics reports are still to come.

5: The initial police contingents had all gone to the area in riot gear. It was only after the Jabbar summoned first two and then six Quick Response Force reserves that police personnel arrived on the scene with weapons. Each reserve is supposed to have a few personnel with weapons.

6: No security order was initiated because the operation was in aid of the district government and was an anti-encroachment drive.

7: If the police had gone in with the intention of killing PAT workers, it would not have waited from 2:30 a.m. until 11:30 a.m. to do that. Jabbar even negotiated with the PAT leaders, who told him they were there to ensure the state cannot remove the barriers and will ‘kill and get killed.’

8: The police high-ups failed miserably to halt the operation after three police personnel sustained bullet wounds, which was when they should have gone public on the presence of weapons inside the compound. It was a terrible mistake not just in terms of media and perception management but also because it called for a change of strategy. Public-unrest management requires pre-analysis, a response while the unrest is being tackled, and a post-event analysis. In a situation where the intentions of PAT workers had been clearly ascertained, carrying on with the operation as if it was still about removing barriers was a blunder. The police got into an untenable situation and just did not know how to get out of it. Instead of revisiting the strategy, they kept reinforcing the original folly.

9: While the cameras were on the police side and reporters were operating in the cover of the police, there were no cameras on the other side of the ‘battlefield.’ The view of what went on was, therefore, half the story.

In addition to the mismanagement by the police at multiple levels, especially after it became clear that the ‘defenders’ had decided to ‘kill or get killed,’ the perceptions entirely go against the police. Take for instance ‘Gullu’ Butt, a known Pakistan Muslim League (Nawaz) tough with contacts in and with the police. Why and how was he there? Who allowed him to damage vehicles with impunity? What was a constable in plainclothes who was dismissed on suspicion of armed robbery doing there and in possession of a firearm?

All these and many other questions are important because, ironically, Pakistani police officers are aware of the U.N. standards of policing, many having served on U.N. duties. The procedure is simple but effective. When a police force is reformed, you start with registering the existing police officers. Phase two requires vetting all of them, and the final stage is about weeding out the unwanted, those with criminal and political affiliations.

Yet, the same police which has helped reform police forces in far-off places is itself infested with many unwanted officers with political and criminal affiliations. The story of Lahore, tragic, has two levels: the pressure of politically-affiliated and motivated general-cadre bureaucrats and politicians on police officers, and the unprofessional conduct of the police itself which was on display. This, then, is a double-whammy.

The Punjab government’s post-event conduct was even more shameful. It started by trying to shift responsibility. The normally hands-on chief minister said that he had no idea why this operation was conducted and by whom. Similar statements were issued by Rana Sanaullah, the hands-on law minister. The police was scapegoated. While it is important to have a detailed inquiry into what went wrong and how and whether the officers on the scene were responsible for the mess, the story cannot be complete without putting the entire episode in a context.

Mercifully, the Punjab government’s initial pitch was not bought by anyone. The chief minister had to do something more than just holding the police officers responsible. He axed his principal secretary and Sanaullah. But the problem is that the deaths and injuries have occurred on his watch and this is now more than just a few people killed. It has become, as the police officers warned before the operation, a full-blown political problem.

Finally, there is another side of the story too and that relates to Qadri and his inordinate ambition. For anyone to think that Qadri is the panacea for what ails Pakistan amounts to believing that the Statue of Liberty, to quote Dorothy Parker, is in Lake Ontario. Qadri’s workers weren’t exactly behaving like law-abiding citizens. Qadri also wants to start a movement at a time when the country cannot afford any more charlatan demagoguery. Now, he has a cause in the form of dead bodies. That bodes ill. It would have been much better if the Punjab government had let him let off steam. Qadri’s tornado is already on a collision course with Khan’s tsunami. A sensible strategy would have been to let the two revolutionaries out-jalsa each other. But that was not to be and all because the Punjab government saw Maula Jatt one time too many.

peaceful demonstrations rallies are the democratic right of each party.why is the govt: resorting to fascist meat to stop PAT workers.No lessons, i guess, learned from the Lahore gory episode. Qadri Sahab Declared his categorical support for on-going operation Zarb-e-Azb .This gesture must have been welcomed to show national unity against the taliban. Govt must mend ways in the greater national interest and we should do everything possible to boost the morale of our defence forces.

I do not think it matters that whether it was cruel month of April or the mayhem happened in June. The fiasco has left the Punjab Chief Minister in dire straits and troubled water. I am sure he would not be able to swim out of this Canal water already polluted with the blood of PAT workers. The PML (N)- government has not shown the political acumen to handle the situation in an amicable manner. There is no politician in the line of the ruling party that can lead the charge. They are rather making the things worst with their stupidity.

These ministers are issuing statement to fuel the fire instead of extinguishing it. The dialogue has deteriorated to the lowest ebb. We can not expect anything better from them.

The Punjab Government has mishandled the situation again. The Carnage in Lahore reminds us of Jalianwala Bagh and General Dyer. Sana Ullah the law minister was made the scape goat, but even this move has not gone in favor of the government. The PAT wants the scalp of Shahbaz Sharif the all powerful dictator of Punjab. Unless he changes his ways and relying on the administration he would not be able to save his hide.