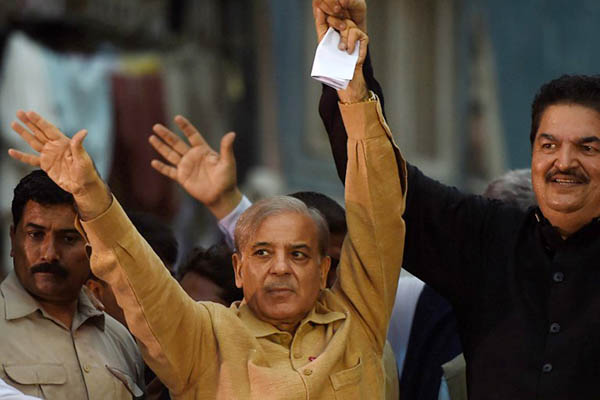 The polls will bring to a head political tensions that have been mounting since former prime minister Nawaz Sharif was ousted by the Supreme Court on corruption charges last July and later barred from politics for life.

Shahbaz Sharif, who succeeded his brother Nawaz as head of the PMLN, held marathon meetings and rallies on Monday and Tuesday, and promised to solve the country’s problems by forging consensus with other parties if elected. “The country is facing big challenges and we will solve it with consensus, if we are given the chance,” he told reporters, adding that “one party can’t solve it alone.”

Later addressing a rally in Karachi, he promised to improve the infrastructure of Pakistan’s biggest city to international standards. “If you elect me, I will change your fate,” Shahbaz promised the rally.

Despite Nawaz Sharif’s ouster, the PMLN party says it has invested in improving Pakistan’s rickety infrastructure and attracted billions of dollars in Chinese investment. It has denied allegations of graft against its leadership made by opponents including Khan.

Shahbaz Sharif, a former chief minister of Punjab, is seeking to become prime minister in what would be only the second-ever democratic transfer of power in the South Asian country. Nawaz Sharif was the 15th prime minister in Pakistan’s 70-year history—roughly half of it under military rule—to be removed before completing a full term.

Pakistan completed its first ever democratic transfer of power following elections in 2013, when the government headed by the Pakistan Peoples Party handed over to the PMLN, following a landslide victory. Khan has already kicked off his election campaign by staging a major rally on Sunday and promising sweeping changes in the country if his party wins.

He has destroyed due poor planning many projects like Quaide Azam Solar Par, Nandipur Power Plant. Sahiwal Project will be a cause pollution being coal fired. Coal will supposedly come from SA to Karachi,then transported to Sahiwal. They have on credit to destroy banks in Yellow Taxi Plan about 20 billions. Sasti Roti Scheme 30 billions. Danish Schools which costed billion but no visible result. Corruption in Ashiana Housing Scheme.