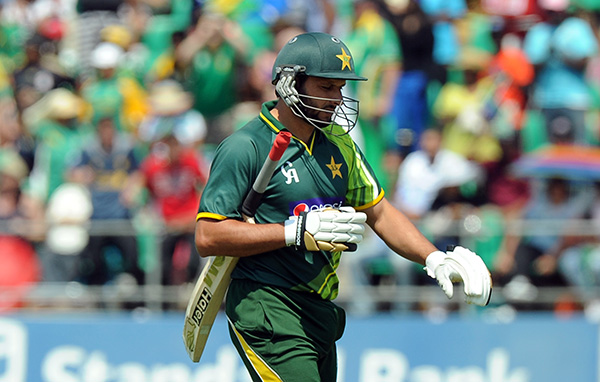 All-rounder says he is still ‘better than most.’

Struggling all-rounder cricketer Shahid Afridi vowed on Wednesday to work hard to return to the Pakistan team after being axed from the 15-man squad for the Champions Trophy.

“Being in and out is a one-off thing. It happens to every cricket player and I will soon stage a comeback because I believe in hard work and performance, so I don’t want to be bitter,” Afridi said.

The big-hitting all-rounder was earlier dropped for the one-day series against India in December before returning for five one-dayers against South Africa in March. He failed to get a single wicket in the 3-2 defeat to the Proteas but was the second-top run-scorer with 126, behind Misbah-ul-Haq on 227.

“I am still better than most,” said Afridi. Asked about reports in the Pakistani media blaming captain Haq for his ousting, Afridi said: “It’s the captain’s will if he wants a player or not but I wish him and the team the best of luck for the Champions Trophy.”

Afridi said he wanted to play cricket with pride and respect. “I know I have ample cricket left in me and I can represent Pakistan for the next few years. It’s not unusual that players get dropped but I appeal to my fans to pray for me,” he said.

Afridi, who has 7,201 runs and 348 wickets in 354 one-days, defended his lack of wickets in one-day internationals. “When I was taking wickets, people used to say that I am not scoring runs and now it’s the other way round,” he said. “I know where to improve and I will show improvement soon.” Afridi, who will play Twenty20 cricket for English country Hampshire in July, added: “I will never become a burden on the team and walk away if I am not up to the mark.”

Pakistan’s chief selector Iqbal Qasim said Afridi’s career was not yet over. “We don’t believe that a dropped player is over the hill. Afridi’s career is not over, he can stage a comeback by performing well at the domestic level like all other players,” he said on Monday.

Pakistan will attend a boot camp in Abbottabad from Friday before heading to Britain, where they will warm up against Scotland and Ireland before featuring in the eight-nation Champions Trophy in England, June 6-23.

now he is good enough only to play with nawaz sharif in lahore gymkhana with a plastic bat.