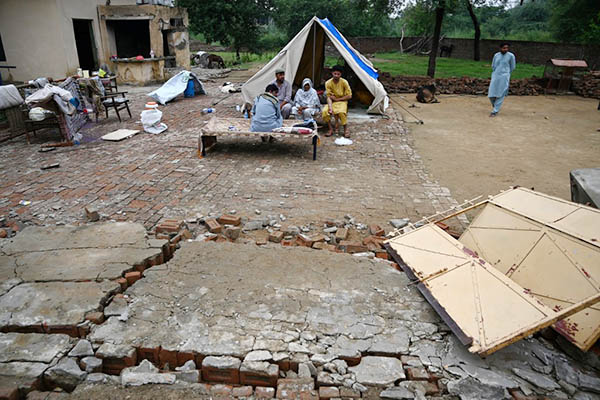 Panic strikes residents of Pakistan-administered Kashmir, which is still reeling from an earthquake that struck two days ago

A shallow tremor sent terrified people running into the streets in northeastern Pakistan on Thursday, days after a powerful quake killed 38 people in the same area and destroyed infrastructure and roads.

An AFP reporter in the city of Mirpur in Pakistan-administered Kashmir described the shaking as “a wave going underneath the earth.”

The U.S. Geological Survey put the quake at 4.7 magnitude and 10 kilometers deep, adding that it had struck just four kilometers outside of Mirpur.

Pakistan’s top meteorologist, Muhammad Riaz, said the epicenter of the 4.4-magnitude tremor was 12 kilometers deep. “It’s hell. I am running to save my life,” Mohammad Bilal told AFP moments after the tremor. “I thought most of the building would have tumbled down,” said Sagheer Ahmad. “Allah is very kind to us.”

City residents huddled in the streets, some still barefoot, while others recited verses from the Quran. Dozens of patients were also evacuated from the main government hospital in Mirpur, some in wheelchairs or on stretchers.

The tremor came as rescuers continued to pick through toppled buildings to reach victims from Tuesday’s earthquake.

The village of Jatlan on the outskirts of Mirpur appeared to be one of the worst affected by Tuesday’s quake, while Mirpur was largely spared major damage. In Jatlan, bridges, mobile-phone towers and electricity poles were badly damaged while its roads were ripped apart by the quake. Pakistani geologists blamed the “poor construction of shanty houses in Jatlan” for some of the damage, as well as its location near a fault line and the shallowness of the quake.

Mirpur, a city known for its palatial houses, has strong ties to Britain with many of its 450,000 residents carrying both British and Pakistani passports.

Tuesday’s quake also sent people in Lahore and Islamabad running into the streets, while tremors were also felt as far as New Delhi.

Pakistan straddles the boundary where the Indian and Eurasian tectonic plates meet, making the country susceptible to earthquakes. In October 2015, a 7.5-magnitude quake in Pakistan and Afghanistan killed almost 400 people, flattening buildings in rugged terrain that impeded relief efforts. The country was also hit by a 7.6-magnitude quake on Oct. 8, 2005, that killed more than 73,000 people and left about 3.5 million homeless, mainly in Pakistan-administered Kashmir.