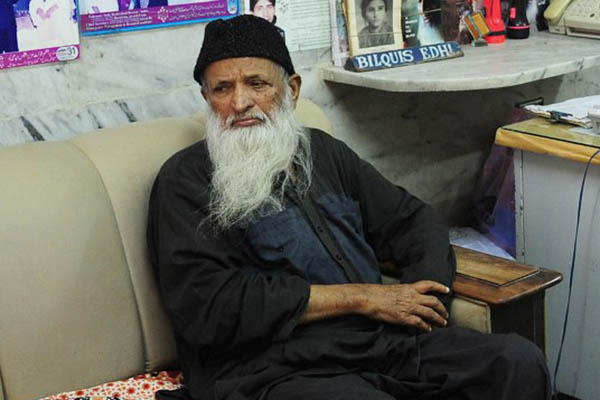 Robbers raided the Edhi Center in Karachi, stealing $400,000 in cash and five kilograms of gold.

Armed robbers on Sunday raided an office of the Edhi Center, one of Pakistan’s leading charities, and stole $400,000 in cash as well as five kilograms of gold, police said Monday.

At least eight robbers struck at the central office of the charity, taking several staff hostage and threatening the organization’s revered founder Abdul Sattar Edhi at gunpoint. Edhi, in his 80s, is one of Pakistan’s best-loved figures for his unstinting work providing ambulance services across the country and running shelters for women, children and the destitute.

Police said the robbers broke into the center, where Edhi also lives, and took the mostly female staff hostage. Edhi, who has been on dialysis for the past year, was sleeping in his room and was woken at gunpoint by the robbers, who demanded the keys to the vaults.

The philanthropist told the robbers he did not have the keys which were held by his wife. The robbers then smashed the locks open.

“Our investigation is going on but it seems that some insider was involved in the robbery,” said Zahid Hussain, a police officer who is part of the investigation team. The robbers made off with five kilograms of gold ornaments and about $400,000 in cash, he said. The value of the gold has not yet been established.

“The gold belonged to people who trust Edhi and gave it for safe keeping, while the dollars were kept to be paid by the charity on some account,” said Anwer Kazmi, Edhi’s right-hand man. “It is a shameful act.”

Edhi runs the largest network of ambulances in Pakistan and his charity organization provides shelter and food to thousands of orphans and homeless women. Always dressed in simple clothes of coarse black cloth, Edhi raises funds through donations from the affluent and through charitable drives during religious festivals.