by AFP and Newsweek Pakistan November 4, 2016 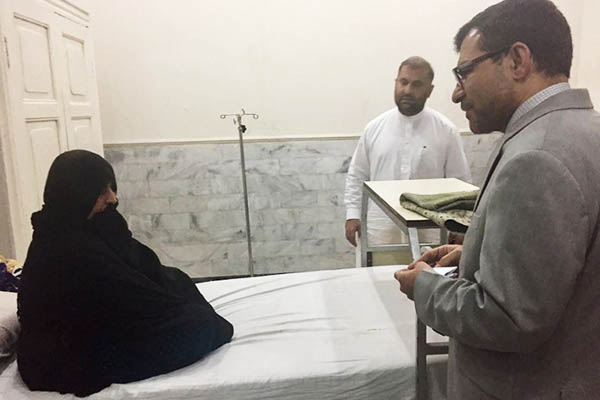 Afghan Consul General in Peshawar Abdul Waheed Poyan speaks with Sharbat Gula at a hospital in Peshawar. A. Majeed—AFP

‘Afghan girl’ has already spent 11 days in FIA custody and will complete her sentence in hospital.

A court in Peshawar on Friday sentenced Sharbat Gula, an Afghan woman immortalized on National Geographic cover in the 1980s, to 15 days imprisonment for obtaining and using a fake Pakistani ID card.

Police last week arrested Gula, whose striking green eyes—captured by photographer Steve McCurry during a visit to a Pakistan refugee camp—helped her image become the most famous cover in National Geographic’s history.

“Gula appeared before the FIA Central Court today and accepted responsibility for obtaining a fake Pakistani identity card with the help of three NADRA officials,” her lawyer, Wafi Ullah told Newsweek. “After hearing her confession, Judge Farah Jamshed sentenced her to 15 days imprisonment and fined her Rs. 110,000. Of her sentence, Gula has already spent 11 days in FIA custody, while the honorable judge has allowed her to complete her imprisonment in hospital where she is currently undergoing treatment for Hepatitis C.” After completing her sentence, Gula will be deported back to her homeland, he added.

The lawyer said the court had shown leniency to Gula, as she was unwell. He said her fine had been paid with the help of the Afghan embassy.

“We… will take her to Afghanistan in an honorable way on Monday,” Abdul Hameed Jalili, counselor for refugees at the Afghan consulate in Peshawar, told AFP. Her children will also return with her.

During the proceedings, FIA officials informed the court that Gula was suffering from Hepatitis C, adding that her husband and eldest daughter had also died of the same disease.

Officials say Gula applied for her Pakistani identity card in Peshawar in 2014, using the name Sharbat Bibi. The UNHCR office in Pakistan says she never officially registered as a refugee, making it harder to offer her aid and ensure she could return to her homeland with other Afghans—over 350,000 of whom have returned from Pakistan in 2016 so far amid fears of a government crackdown.