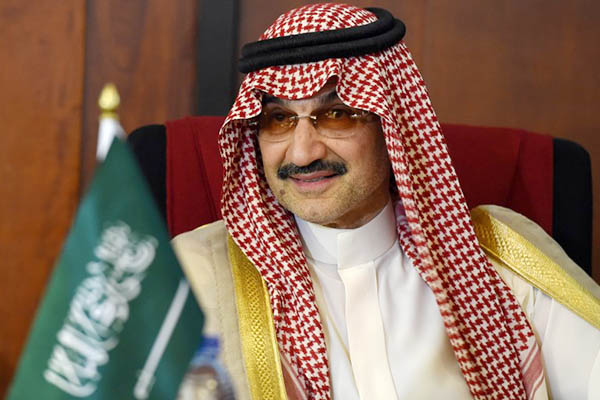 Kingdom Holding, one of Saudi Arabia’s most important investors, ended day down 7.6 percent

Shares in Kingdom Holding, 95 percent of which is owned by Saudi billionaire Prince Al-Waleed bin Talal, fell sharply on Sunday after reports of his arrest.

The share price of the company, which has high profile investments inside and outside Saudi Arabia, dropped 9.9 percent at the start of the week’s trading. Shares are allowed to drop a maximum of 10 percent on one day. But the share price later recovered some of its losses to end the day down 7.6 percent.

TASI dropped 1.6 percent only a minute after the start of trading on the Arab world’s largest stock market following a sweeping crackdown on corruption that saw the arrest of leading royals and businessmen. Since the start of 2017, Kingdom Holding has lost around 15 percent of its market value.

The latest fall came despite the company announcing earlier on Sunday that its profits for the third quarter and the first nine months of the year had increased.

Kingdom Holding is one of Saudi Arabia’s most important investors with shares in U.S. tech giant Apple and Rupert Murdoch’s News Corporation, among others. It also has key stakes in banks at home and abroad, as well as a number of investment, media and agricultural companies.

Head of the Saudi National Guard, once a leading contender to the throne, as well as the navy chief and the economy minister were replaced in a series of high-profile sackings that sent shock waves in the oil-rich Gulf country. The crackdown was reported immediately after a new anti-corruption commission, headed by powerful Crown Prince Mohammed bin Salman, was established by royal decree late Saturday.