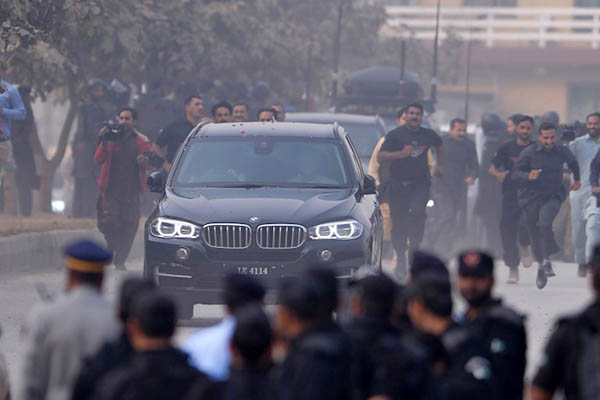 Ousted premier Nawaz Sharif appeared in court on Friday, a day after returning from overseas to face corruption allegations that saw him ejected from office and targeted with an arrest warrant.

In a brief hearing in Islamabad, Sharif paid two surety bonds of five million rupees each before leaving under tight security, his lawyer Khawaja Haris told AFP. The court is set to reconvene on Nov. 7.

The former premier, who was forced out by the Supreme Court in July over a scandal kindled by the Panama Papers leak, had been facing an arrest warrant for failing to appear at hearings since early October. He has spent most of the time since in London, where his wife is receiving treatment for cancer. He arrived in Islamabad on Thursday.

Sharif became the 15th premier in Pakistan’s 70-year history to be ousted before completing a full term, after the corruption investigation against him. The claims against the prime minister stemmed from the Panama Papers leak last year, which sparked media frenzy over the luxurious lifestyles and high-end London property portfolio owned by his family.

Sharif and his supporters have denied the allegations and hinted at a political conspiracy driven by the military. “I am going to Pakistan despite [my wife’s] chemotherapy to appear in a bogus case,” he told media in London before departing. “Pakistan’s system has contradictions… all this must be changed, now is the time to change it.”

He said nothing to media outside the court in Islamabad, but his son-in-law Muhammad Safdar also hinted at a conspiracy. “Till the time the courts are… free from the fear of some other people, I can’t expect any fair trial from this court,” Safdar said outside the court.

Earlier this week Sharif summoned top officials from his eponymous ruling Pakistan Muslim League (Nawaz) to London for a summit on the party’s leadership as legal pressure grows. Sharif named loyalist Shahid Khaqan Abbasi as prime minister days after his ousting, and said his younger brother Shahbaz, currently the chief minister of Punjab province, would eventually succeed him.

Local media reports have said the party plans to keep Sharif as a central figure during campaigning for a general election due to be held sometime next year, despite the Supreme Court barring him from holding office.