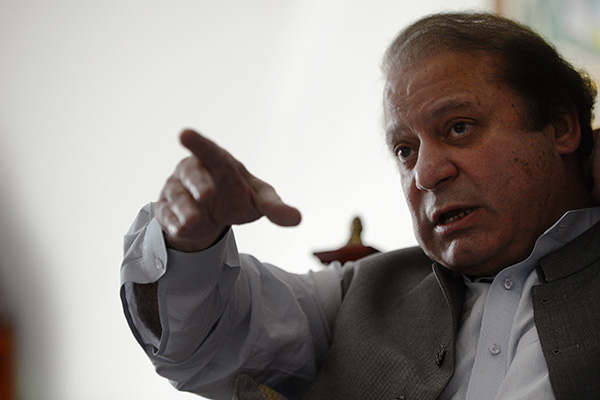 “The drone attack was not only a violation of the country’s sovereignty and territorial integrity, but also an action that has been declared as a violation of international law and the U.N. Charter,” said a statement issued by the media cell of Sharif’s Pakistan Muslim League (Nawaz) party.

The Pakistani Taliban on Thursday withdrew their offer of peace talks with the government after confirming the death of their second-in-command in the U.S. drone strike. Wali-ur-Rehman was killed when an unmanned U.S. aircraft attacked a house in North Waziristan early on Wednesday. The attack was the first since Pakistan’s May 11 general elections, which were won by Sharif’s PMLN.

The statement said a close aide of Sharif on Friday met with U.S. official Richard Hoagland and conveyed Sharif’s sentiments on the latest strike.

Sharif, due to assume office on June 5, “expressed his serious concern and deep disappointment,” it said, adding that the incoming P.M.’s aide stressed in his conversation with the U.S. diplomat that the drone attack, coming within days of U.S. President Barack Obama’s crossroads speech “was highly regrettable, particularly as the president had spoken of initiating a new policy that would ensure greater exercise of care and caution in the use of this technology.”

“Meaningful consultations and close cooperation between the two countries should be the desired course of action, rather than unilateral measures,” the statement added.

Obama last week defended the legality of the CIA-run strikes, which began in Pakistan in 2004 but became more frequent during his presidency, outlining new rules for their use. The guidelines say drone strikes can only be used to prevent imminent attacks, when the capture of a suspect is not feasible and if there is a “near certainty” that civilians will not be killed.

The Tehreek-e-Taliban Pakistan hailed Rehman, who had a $5 million U.S. bounty on his head, as a “martyr” and vowed to avenge his death, saying they held the Pakistani government responsible for the attack. TTP supremo Hakimullah Mehsud made an offer of talks to the government in December but imposed demanding conditions and said his men would never lay down their arms. Rehman was seen as a more moderate force than Mehsud and there had been the impression he could have a role to play in any possible negotiations

Washington had accused Rehman of organizing attacks against U.S. and NATO forces in Afghanistan and also wanted him in connection with a suicide attack on an American base in Afghanistan in 2009 that killed seven CIA agents. The 42-year-old had been a key figure in the TTP since its inception in 2007 and was second-in-command of the national hierarchy behind Hakimullah Mehsud, as well as leading the group in South Waziristan.

Drone strikes have been unpopular in Pakistan, where officials denounce them as illegal and a violation of sovereignty, but the United States believes they have been effective in wiping out Taliban and Al Qaeda leaders.