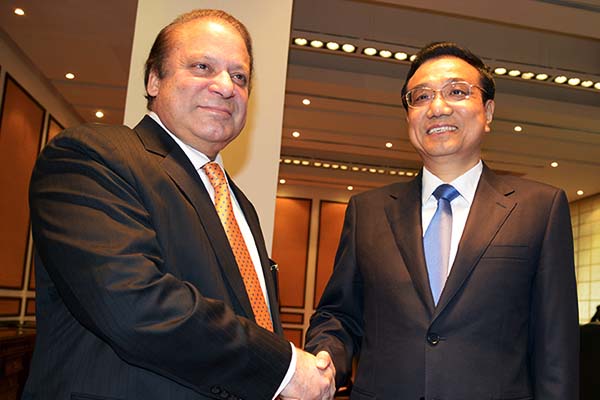 Prime Minister Nawaz Sharif heads to China this week on his first foreign tour since being elected in May, eyeing high-impact Chinese infrastructure projects as an answer to economic malaise and a crippling energy crisis.

Weak growth, inflation, dwindling foreign exchange reserves, and power cuts of up to 20 hours a day ruining industry are some of the biggest problems that Sharif faces as head of government.

He made fixing Pakistan’s woeful economy and energy crisis the mantra of his election campaign and since winning a comfortable majority, has sought to strengthen economic ties with Beijing, arguably Islamabad’s closest ally.

Before even being sworn into office, Sharif hosted Li as the first foreign head of government to visit after his election victory.

Sharif said Saturday that plans to build a trade corridor from the Chinese border to the Arabian Sea would be a “game changer” that would bring development and prosperity to three billion people. “Pakistan has to come out of its difficulties and we want to cooperate with each other on … infrastructure and in the field of energy,” Sharif added.

Chinese investment is popular in Pakistan where Sharif, himself one of the richest businessmen in the country, won plaudits for pulling off high-impact infrastructure projects such as a high-speed motorway during his two previous tenures in office.

“A trade corridor really could be transformative in parts of our ailing economy and it is here that the technocrats and business acumen of the new government are going to be shaping future foreign policy for Pakistan,” according to an editorial published in The News on Monday.

China-Pakistan trade last year reached $12 billion and is targeted to rise to $15 billion in the next two to three years.

During his visit to Islamabad, Li said Beijing was ready to speed up work to upgrade the Karakoram Highway, a vital link to any future economic corridor into Pakistan from the Chinese border. China this year acquired Pakistan’s Gwadar port, which through an expanded Karakoram Highway could connect it to the Arabian Sea and Strait of Hormuz, a gateway for a third of the world’s traded oil.

On Monday, China’s foreign ministry spokeswoman Hua Chunying told reporters that Beijing attaches great importance to Sharif’s visit and welcomed the agreement on an economic corridor. “I believe that such a cooperation project will help both countries as well as the development of the whole region,” she told reporters.

Analyst Andrew Small of the German Marshall Fund of the United States said Pakistan was hoping for “substantive agreements.” He said the most important areas were the economic corridor to Gwadar, particularly proposed new infrastructure links, an extension of cooperation on hydropower projects and nuclear cooperation, which he said looks like moving into the 1,000-megawatt range, China’s first such reactors overseas. “How much gets formally announced during the visit is another matter—especially when it comes to the still-sensitive questions around Sino-Pakistani civil-nuclear cooperation,” he said.

But China will also raise concerns about security.

Any route to Gwadar lies through the southwestern province of Balochistan, which is plagued by separatist, sectarian and Taliban violence.

On June 22, gunmen shot dead 10 foreign climbers, three of them Chinese, at a base camp in the Himalayas, the worst attack on foreigners in the country for a decade. The mountaineers were killed in a region not only supposedly safe but not too far from where some Chinese hydropower and infrastructure projects are underway, Small said.

The Chinese are also concerned that the separatist East Turkestan Islamic Movement, which wants an independent homeland for Xinjiang’s Muslim Uighurs, is training “terrorists” in Pakistan. “[The Chinese] don’t want Afghanistan to become a safe haven for ETIM after the U.S. withdrawal in 2014, as it was in the 1990s, and they want Pakistan’s help to ensure that this doesn’t happen,” said Small. “The Chinese are very concerned about the prospects for Afghanistan and in the last 18 months or so, they have discussed it far more intensively with Pakistan than they did in the past.”