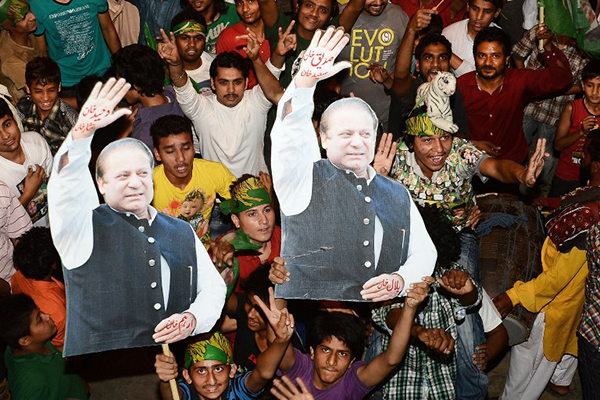 New administration also expected to be pragmatic on foreign relations.

Nawaz Sharif, Pakistan’s next prime minister, looks set to be a pragmatic ally of Washington, unlikely to end the war against Al Qaeda and the Taliban as he seeks to focus on fixing the economy.

Sharif, 63, voiced support on the campaign trail for peace talks with Taliban militants who have killed tens of thousands in Pakistan since the war on terror began. The fact the Taliban threatened and attacked his rival Pakistan Peoples Party and its main allies, drastically curtailing their ability to campaign, is in danger of being seen as contributing to his election victory.

But Sharif—who, apart from tackling the Islamist militancy, faces a major challenge to repair the shattered economy and address a crippling energy crisis—has been quick to dispel any potential concerns from the West. “What is most important is that we must never allow our soil to be used by anyone to create problems with any country in this world,” he was quoted as telling The Sunday Telegraph as it emerged he had won Saturday’s election.

U.S. President Barack Obama said on Sunday that Washington would continue to work with the new government “as equal partners in supporting a more stable, secure, and prosperous future for the people of Pakistan.”

And Jonah Blank, the former Senate Foreign Relations Committee director for South Asia, said Sharif’s people would be comfortable working with their U.S. counterparts. “I don’t really see any evidence that he is an extremist leader in any way or that some of his rhetoric—anti-U.S. rhetoric, perhaps pro-Islamist rhetoric—will translate into a wild swing in policy,” he said.

The relatively weak showing of Sharif’s Pakistan Muslim League (Nawaz) in the northwest, where cricket star Imran Khan’s promises to end U.S. drone strikes and Pakistani military operations struck a chord, is another indication that his policy differs little from the outgoing government. Sharif publicly supported major offensives against Pakistani Taliban in the district of Swat and the tribal region of South Waziristan in 2009.

Sartaj Aziz, a senior PMLN official and former Sharif cabinet minister, denied there would be a substantive change of strategy in the northwest. “The key point which Nawaz Sharif emphasizes in our manifesto is we can’t negotiate with people who don’t accept our writ, our Constitution, our Parliament, our judiciary,” he said, adding that what is needed is a “composite strategy” involving military action as well as negotiation.

Previous Pakistani governments, as well as the military, have forged ad hoc peace deals with insurgent factions in various parts of the northwestern tribal belt, which have often broken down quickly. The Taliban, who denounce democracy as un-Islamic, killed more than 150 people during the election campaign, including 24 on polling day itself.

Spokesman Ihsanullah Ihsan said the insurgents would “wait until political parties form their government” but said before the polls that anyone who “comes into conflict with Islam” would be targeted.

Commentators believe it is significant that Sharif has been less vocal against U.S. drone strikes than Khan and stress he is a pragmatist. “He is likely to approach the U.S. with maturity and dispassionately,” said political and security analyst Imtiaz Gul.

“The war on terror and the drone campaign is winding down anyway, so he won’t try to be too vocal about it the way Khan is. He is likely to impress upon the U.S. a more defensible way of conducting drone strikes,” said Gul.

Commentators expect little change in policy on Afghanistan, citing a strong cross-party and civilian-military consensus on doing what they can to try to help bring peace, despite deteriorating relations with President Hamid Karzai.

“The more important thing is the post-2014 strategy and that has to be worked out in consultation, how you ensure that Afghanistan becomes peaceful and stable with a stable government that is acceptable to all,” said Aziz.

On India, Pakistan’s archrival with whom it has fought three wars, Sharif has also sought to tread a pragmatic line, emphasizing his effort to improve relations with New Delhi during his last tenure. The relationship “requires much better high-level contact which [Sharif] and Manmohan Singh can quite easily do,” Aziz said. “If high-level contact will take place in the next few weeks I’m sure the peace process will get accelerated and many of these things will start moving forward.”

We’re not going to allow anybody hunting down anybody or being a traitor to Pakistan or it’s people. That includes the Taliban, we want strong ties with all.