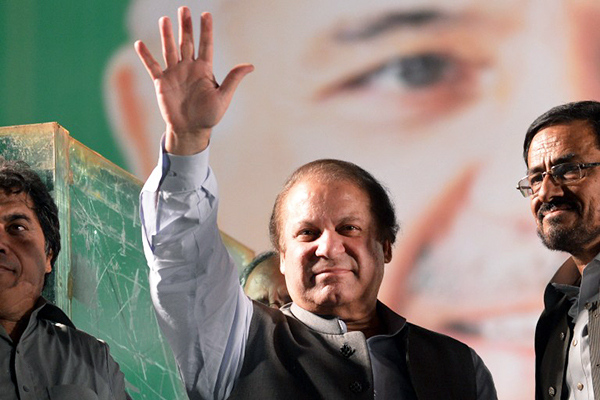 Nawaz Sharif has the highest approval rating of any public figure in Pakistan, according to the latest survey from the Pew Research Center released on Tuesday.

At 66 percent, Sharif has gained four percentage points from the last Pew poll in 2012. “Sharif is particularly well liked in Punjab province (78 percent),” notes Pew. He is followed by Imran Khan, who is the only real electoral threat to Sharif on May 11, when Pakistan’s 86.2 million registered voters get to elect representatives to the national and four provincial assemblies. Khan’s approval rating is 60 percent, down 10 points from last year. Khan’s “drop has been especially steep among 18- to 29-year-olds, his strongest supporters in 2012 (63 percent favorable in 2013 vs. 76 percent in 2012),” says Pew. (His fall and hospitalization on May 7 could provide him a sympathy bump.)

The Army chief, Gen. Ashraf Kayani, is in third place with an approval rating of 45 percent, nine points lower than last year. He is followed by Pakistan’s Chief Justice Iftikhar Chaudhry, who has shed eight points from last year, with an approval rating of 43 percent. (Chaudhry’s approval rating peaked in 2010 at 61 percent.) Raja Pervaiz Ashraf, the former prime minister, is viewed favorably by 17 percent of those surveyed, and President Asif Ali Zardari’s favorability numbers are static at 14 percent. “Just 53 percent of those who identify with the PPP are favorable toward Zardari,” says Pew. Additionally, 15 percent say Zardari has had a good influence on Pakistan, 83 percent say he’s had a bad one.

Crime is a “very” or “moderately serious problem” for 99 percent of respondents, terrorism for 98 percent, illegal drugs for 93 percent, “corrupt political leaders” and poor quality schools each for 90 percent, pollution for 89 percent, the “Kashmir situation” and lack of access to clean water each for 85 percent, people leaving abroad for jobs for 82 percent, Sunni-Shia tensions for 77 percent, the situation in Afghanistan for 67 percent, Indian influence in Afghanistan for 59 percent, and the conflicts between the government and military and between the government and judiciary each for 51 percent. 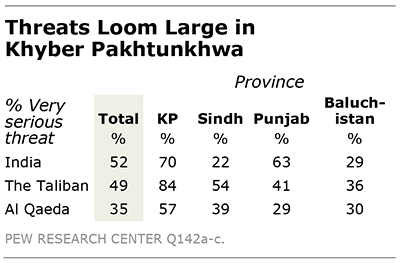 Seventy-four percent agreed that drones “kill too many innocent people” with 11 percent disagreeing; 39 percent agreed that drone strikes are “being done without government approval” with 29 percent disagreeing; 33 percent said the strikes are “necessary” with 40 disagreeing. However, 44 percent (compared to 37 percent last year) want the U.S. to provide intelligence and logistical support to the Pakistan Army in its fight against terrorists.

Pew Research Center’s Global Attitudes Project’s survey, On Eve of Elections, a Dismal Public Mood in Pakistan: Rising Concerns about the Taliban, is based on 1,201 in-person interviews conducted during the last 20 days of March, and is representative of about 82 percent of Pakistan’s adult population. “The sample is disproportionally urban, but the data are weighted to reflect the actual urban-rural distribution in Pakistan,” says Pew. No interviews were conducted in the federally-administered tribal areas, Pakistan-administered Kashmir, Gilgit-Baltistan, and parts of Khyber-Pakhtunkhwa and Balochistan skipping 18 percent of the population, it says.