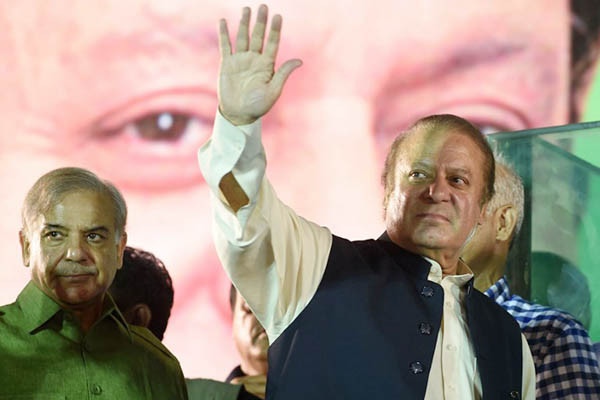 Former prime minister Nawaz Sharif told thousands of supporters he would “change the fate of the country” despite being ousted by the Supreme Court, as he ended a four-day procession from Islamabad to Lahore on Saturday.

Sharif had addressed crowds along the route that connects the capital to his party’s eastern stronghold after Pakistan’s top court deposed him last month following a corruption investigation.

“I don’t get scared and I will not sit at home now,” he said. “I will not sit at home until I change the fate of this country. This country belongs to 200 million people and not the few who ousted me, disrespecting your vote. Who are those people who have disqualified me? Are they themselves qualified?” he asked the crowd, which responded with chants of “Prime Minister Nawaz Sharif.”

Lahore is only five hours’ drive from Islamabad, but Sharif’s convoy made three overnight stops, breaking up the journey with addresses to supporters in a display of street power against the court judgment.

Thousands came to catch a glimpse of the former leader as his convoy rolled down the Grand Trunk Road, a more than 2,000-year-old trade route that leads from Chittagong in Bangladesh across India and Pakistan to the Afghan capital Kabul.

The group was surrounded by heavy security, with fears lingering after a truck bomb exploded in Lahore on Monday, killing one person and injuring dozens. Sharif traveled in an armored vehicle.

On Friday, Sharif’s motorcade hit and killed a 13-year-old boy who had come to his rally in Lalamusa, a town on the Grand Trunk Road.

Sharif was the 15th prime minister in Pakistan’s 70-year history—roughly half of it under military rule—to be ousted before completing a full term. On Friday it was announced that Sharif’s wife, Kalsoom Nawaz, would contest the parliamentary seat left vacant after his ouster.