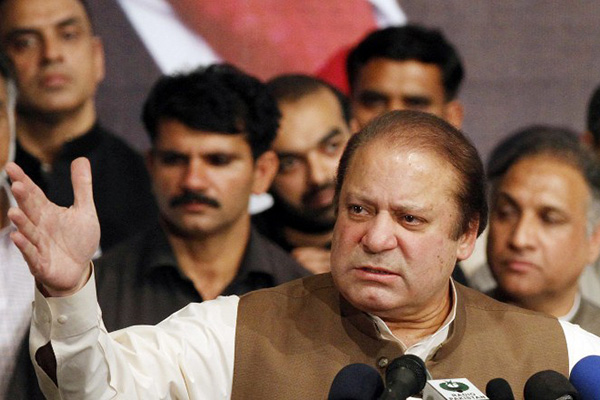 Negotiations with local militants will be top priority for incoming government.

Incoming prime minister Nawaz Sharif on Monday threw his support behind peace talks with Pakistan’s local Taliban, saying it would be a top priority for his new government.

“If the Taliban have offered us an option to have dialogue then we should take it seriously,” Sharif said while addressing his party’s newly elected parliamentarians in Lahore. “Terrorism is one of the main problems [facing] Pakistan. Establishment of peace in Pakistan is one of our top priorities and we are discussing ways and means to establish peace,” he said.

Sharif, whose Pakistan Muslim League (Nawaz) won a resounding victory in the May 11 elections, is set to serve an unprecedented third term as premier nearly 14 years after he was deposed in a coup. He expressed support on the campaign trail for peace negotiations with Taliban militants blamed for killing thousands of people in a nearly seven-year insurgency.

Pakistan’s umbrella Tehreek-e-Taliban movement signaled in February its willingness to enter peace talks with the government but also stepped up attacks against Sharif’s rival Pakistan Peoples Party and its main allies, drastically curtailing their ability to campaign during the elections.

Previous Pakistani governments, as well as the military, have forged ad hoc peace deals with insurgent factions in various parts of the northwestern tribal belt, which have often broken down quickly.

The Taliban, who denounce democracy as un-Islamic, killed more than 150 people during the election campaign, including 24 on polling day itself.

Taliban spokesman Ihsanullah Ihsan had said the insurgents would “wait until political parties form their government” but added before the polls that anyone who “comes into conflict with Islam” would be targeted.