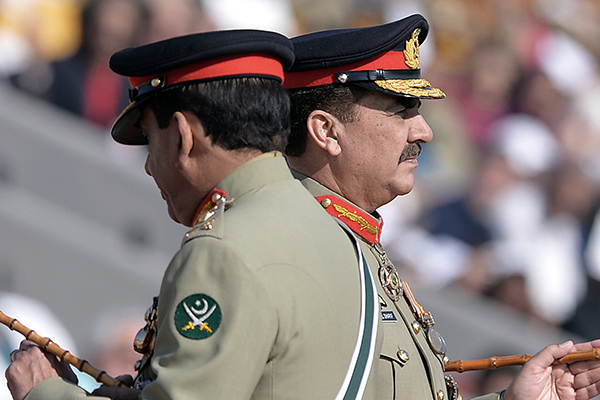 Sharif, 57, took over as Chief of Army Staff from his predecessor, Gen. Ashfaq Kayani, at a ceremony held at military headquarters in Rawalpindi today.

Prime Minister Nawaz Sharif’s office named General Sharif, no relation, as Kayani’s successor on Wednesday. The prime minister passed over two more senior generals to appoint his namesake, and will be hoping to avoid a repeat of events the last time he named an Army chief—Gen. Pervez Musharraf overthrew him in a coup in 1999.

General Sharif will serve as Army chief for three years. Born in Quetta, the general’s father and brother were both Army majors; the latter died in the line of duty. Sharif has attended Government College, the Pakistan Military Academy, the U.K.’s Royal College of Defense Studies, and the Canadian Army Command and Staff College. He has also taught at Quetta’s Command and Staff College, and served as commandant of the Pakistan Military Academy.

Sharif was commissioned into the 6th Battalion Frontier Force Regiment in 1976. Until recently, he was the Army’s inspector-general for training and evaluation, where his role “resulted in [the] fructification of Pakistan Army’s operational thought and doctrinal response to the much vaunted Cold Start doctrine of the Indian Army,” according to the military’s Inter-Services Public Relations agency. He has two sons and a daughter, and is, says ISPR, “an avid reader” who also “enjoys hunting and swimming.”

The now former chief, Kayani, in his valedictory speech on Friday paid tribute to the soldiers who had died fighting what he called the “internal threat.”

“The biggest sacrifice is that of one’s life, and the Army has always been ready to lay down their lives for the country throughout history,” said Kayani. “There is no place in any part of the country where there is no tomb of our martyrs, but in the last decade there has been a rapid increase in the number of these tombs.” Kayani told the audience of troops and dignitaries in Rawalpindi that he had “kept the interests of the Army, the country, and the nation above everything.”

Kayani succeeded Musharraf as Army chief in 2007, and was given a full, three-year extension in 2010.

please read carefully, “the general’s father and brother were both Army majors; the latter died in the line of duty [the latter (Maj Shabbir Sharif Faateh-e-Saboona N.H indeed was a man of valour].”