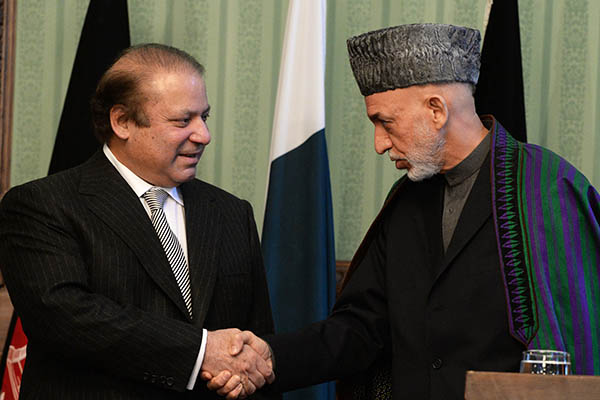 Islamabad urges Kabul to shut down Afghan border, as insurgent death toll after three days of airstrikes rises to 190.

Prime Minister Nawaz Sharif has urged Afghan President Hamid Karzai to help stop insurgents from escaping a major military offensive, as residents who fled the area anxiously await news from those left behind.

The figure could not be independently confirmed and some residents who had escaped the area spoke of civilian casualties from aerial bombing before the operation was officially launched, as they awaited a break in the fighting to rescue relatives who remained behind.

The Pakistan Army launched the offensive—a longstanding demand of the United States—on Sunday, a week after an attack on Karachi’s Jinnah International Airport, which killed dozens and marked the end of a troubled peace process.

An exodus of militants from the area had been a concern ahead of the operation, with residents and officials reporting that the majority of Taliban and foreign fighters had fled to the porous border area. Foreign Office spokeswoman Tasnim Aslam said Sharif had requested Karzai to help stop the flow of people.

“Prime Minister Nawaz Sharif called Hamid Karzai last night to request him for the closure of Afghan border to avoid exit of militants to Afghanistan from Pakistan during the military offensive,” she said.

Karzai’s office later issued a statement asking Pakistan to take all steps to reduce civilian casualties, adding that Sharif would soon send a “special envoy” to discuss the issue. “Afghanistan is ready for any cooperation so that terrorists’ sanctuaries that exist on the other side of the Durand Line be eliminated and that attacks on Afghanistan stop,” the statement added.

Thousands of people have fled across the border into the Gorbaz district of Afghanistan’s Khost province, according to provincial government spokesman Mobarez Mohammad Zadran, and are being provided with food and aid.

Others have made their way to the ancient town of Bannu which lies 10 kilometers to the east of the North Waziristan tribal area in neighboring Khyber-Pakhthunkwa province.

The town’s bazaar was packed by tribesmen waiting for their relatives along the single road that connects Bannu to the tribal area and is currently dominated by military convoys. Laver Khan 50, a dry fruit supplier from Datta Khel village who had arrived last week said he had rented a house for 25 members of his family.

“At least they [authorities] should have given us enough time to vacate our areas,” Khan said, claiming that dozens of other family members had been trapped and were now waiting for a break in the curfew to escape. “I haven’t contacted them for days, I am worried what is happening there,” he added.

Haji Saleem Khan, 60 and who arrived from Mir Ali last week, said: “They killed women and children in the airstrikes, I myself took out bodies from under the rubble. We support a real operation against militants but with this type of bombing they are killing many innocent people.”

Rents in the town have gone up five-fold, residents reported, while two camps built on the outskirts lie almost unused because of the soaring heat, lack of electricity and running water.

Sharif has said the offensive will usher in peace but militants vowed revenge and warned foreign firms to leave the country. The Army has deployed tanks, ground troops and jets in the area but has encountered relatively little resistance so far, with the majority of alleged militant deaths resulting from airstrikes. Pakistan’s Army has so far lost eight soldiers, according to officials.

Well, u guys sent us a lot these terrorists now it is time for Afghanistan to pay back for your good deed. so Plz enjoy the terror, Pakistan!!!