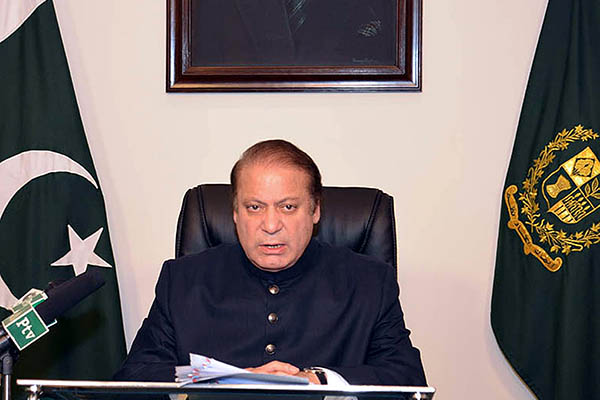 Pakistan’s prime minister says if talks fail, he is willing to use force to end terrorism.

Prime Minister Nawaz Sharif on Monday called for dialogue with extremists to end bloodshed that has left thousands dead in the country in over a decade of violence.

He made the offer during his first televised address, a sweeping, hour-long speech that focused on Pakistan’s myriad problems, since taking office after winning elections in May. He stopped short of unveiling specific policies designed to tackle the nation’s enormous budget deficit, solve a crippling energy crisis or clamp down on Islamist extremists and separatist rebels.

“Wisdom demands that we follow a path where we minimize the loss of innocent lives,” said Sharif.

He campaigned for an historic third term as premier by offering peace talks to the Pakistani Taliban, the leaders of a devastating domestic insurgency that has links to Al Qaeda. He said he was expanding on his original offer after the elections of inviting all political parties to discuss together how best to resolve Pakistan’s security and economic woes.

“This policy of reconciliation is not confined just to political parties. I take a step forward and invite for dialogue all those elements who have unfortunately adopted the path of extremism.”

But Sharif said dialogue was not the only option.

“I want an end to terrorism whether it is through dialogue and reconciliation, or through full use of force,” he added.

The prime minister blamed the government, security services and the judiciary for failing to crack down on terrorism, but stopped short of naming names or of unveiling any new policies to check the violence. “The time has come when we should admit that our administrative institutions, our agencies and our system of justice have failed to appear competent in dealing with the challenge of terrorism,” said Sharif. “The nation is justified to know why concrete steps were not taken to stop the bloodshed and destruction.”

In addition to Islamist militancy, he said the government would help Balochistan province deal with a separatist insurgency waged by ethnic Baloch fighters.

Sharif did not address recent violations of the ceasefire along the de facto border with India in divided Kashmir, but said that both countries had to work together to overcome social ills. “The wars they fought pushed them back to the past. The two countries should realize they have to wage a meaningful war against hunger and poverty instead of indulging in armed conflict.”

Earlier on Monday, India’s defense minister said the Indian army would take “all possible steps” to counter any ceasefire violations by Pakistan along the Line of Control. Skirmishes have erupted across the heavily militarized border since five Indian soldiers were killed earlier this month in an ambush, which India has blamed on the Pakistan Army. Last week, Sharif responded to the tensions by calling for “restraint and responsibility.”