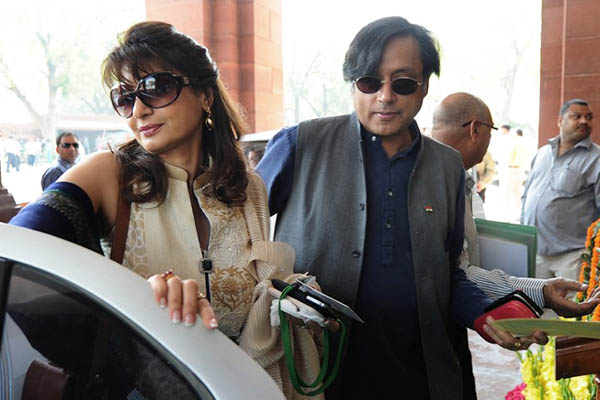 Sunanda Pushkar was found dead in her hotel room last year after claiming her husband was having an affair with a Pakistani journalist.

The wife of a former Indian government minister was murdered and did not commit suicide as earlier suspected, Delhi’s police chief said Tuesday.

Sunanda Pushkar was found dead in her five-star hotel room in the capital last January, two days after she alleged on Twitter that her husband Shashi Tharoor had been having an affair with a Pakistani journalist.

Pushkar, married to Tharoor since 2010, had been taking medication for various illnesses and early autopsy results suggested she might have overdosed on anti-depressants and sleeping pills. But speaking to reporters on Tuesday, Delhi Police Commissioner Bhim Sain Bassi said new medical reports had led investigators to register a case of murder “against unknown persons.”

“We have registered a case of murder,” Bassi said in the capital. “The report given to the Delhi Police by the medical board says that her death was unnatural and it was because of poisoning. The poison could have been administered orally or could also have injected, so keeping all these factors in mind, the case has been registered.”

The discovery of Pushkar’s body triggered intense speculation that she had committed suicide after being humiliated by her husband. Her death dealt a severe blow to the image of Tharoor who was a cabinet minister at the time and remains a member of parliament for the Congress party, which lost elections last May.

In remarks carried by several media outlets, Tharoor was quoted Thursday as saying he was “stunned” to hear his wife’s death was being treated as murder. “All I want is that a comprehensive investigation be conducted and that the unvarnished truth should come out,” said the 58-year-old.

Also an acclaimed author, Tharoor served as under-secretary general during Kofi Annan’s leadership of the United Nations and was a candidate to replace him as secretary-general in 2008. After being beaten to the post by Ban Ki-moon, he then entered Indian politics as a member of parliament for the southern state of Kerala.

Tharoor had to resign from his first ministerial post in 2010 after reports emerged that his then-girlfriend Pushkar had been given a free stake in an Indian Premier League cricket team.