‘She Was Busy Saving Lives’ 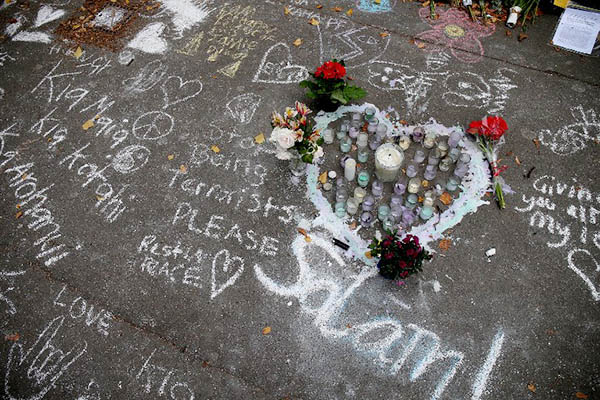 As New Zealanders mourn those killed in horrifying gun attacks on two Christchurch mosques, a fuller picture of the 50 victims has begun to emerge.

Their tragic stories include the woman murdered trying to rescue her wheelchair-bound husband, and the massacre’s youngest reported victim—aged just three.

Here are some of their stories:

‘She was busy saving lives’

Husna Ahmad, 44, was killed as she rushed back in to the Al Noor mosque to save her wheelchair-bound husband. She was among at least four women murdered in the attack. She had already exposed herself to huge danger by helping several women and children escape from the building, shepherding them out as the shooting started.

“She was screaming ‘come this way, hurry up,’ and she took many children and ladies towards a safe garden,” said husband Farid Ahmad. “Then she was coming back for checking about me, because I was in a wheelchair, and as she was approaching the gate she was shot. She was busy saving lives, forgetting about herself.”

Farid said he forgives the gunman, and harbors no hatred toward him. “The best thing is forgiveness, generosity, loving and caring, positivity.”

The Afghan who ran into gunfire

A 71-year-old Afghan man died after he reportedly ran into the line of fire to save fellow worshippers at the same Al Noor mosque.

Daoud Nabi had lived in New Zealand for more than 40 years after fleeing Afghanistan in the late 1970s, and believed his adopted home to be a “slice of paradise,” said his son Omar.

Omar learnt his father had died trying to shield someone else from a bullet. “I got told by my best friend’s father… that he leaped on somebody else to save their life,” he told news website Stuff. “He jumped in the firing line to save somebody else’s life and he has passed away.”

The Pakistani who tried to tackle the shooter

Video of the massacre shows one man gunned down as he rushes the shooter, while others flee. The man is believed to be Naeem Rashid, from Pakistan, although his face is blurred in the footage and he has yet to be formally identified.

Both Rashid and his son died in the massacre. “Pakistan is proud of Mian Naeem Rashid who was martyred trying to tackle the White Supremacist terrorist & his courage will be recognized with a national award,” Prime Minister Imran Khan said Sunday. “Mian” is an honorific.

Rashid’s elder brother Khurshid Alam said he was “proud” of his sibling. “He could have saved his life but he preferred to save others. He was a brave guy,” Alam said.

The attack’s youngest recorded victim, three-year-old Mucad Ibrahim was at the Al Noor mosque with his brother and father, who both survived. His brother Abdi managed to flee the carnage while his father pretended he was dead after he was shot and managed to escape, The Age said.

Mucad was the youngest victim named on an incomplete and unconfirmed list being circulated by families of the deceased. He was “energetic, playful and liked to smile and laugh a lot,” his brother, who hails from Somalia, told news website Stuff.

Sayyad Milne, 14, died at the Al Noor mosque, which he attended with his mother and friends every Friday, the New Zealand Herald reported.

His father John Milne said the boy’s death had not been officially confirmed but he had been told the teenager had been seen lying on the floor of the mosque, bleeding. “I’ve lost my little boy, he’s just turned 14,” he told the paper. “A brave little soldier. It’s so hard… to see him just gunned down by someone who didn’t care about anyone or anything.”

The father and daughter in hospital

A four-year-old Jordanian girl is in intensive care at a specialist children’s hospital after she and her father were seriously injured in the shooting.

Alin Alsati was praying alongside her father Wasseim at the Al Noor mosque when she was shot at least three times. The preschooler was airlifted to Starship children’s hospital in Auckland, the country’s top pediatric center.

In a video filmed from his hospital bed, Wasseim asked people to “please pray for me and my daughter.” He recently emigrated to New Zealand from Jordan and had just set up a barbershop.

Thirty-three-year-old goalkeeper Atta Elayyan was among the deceased. He had played 19 A Internationals for the Futsal Whites, according to NZ Football. Teammate Josh Margetts said: “There is a huge hole in our hearts as we come to terms with the loss of a great person and a good mate.”