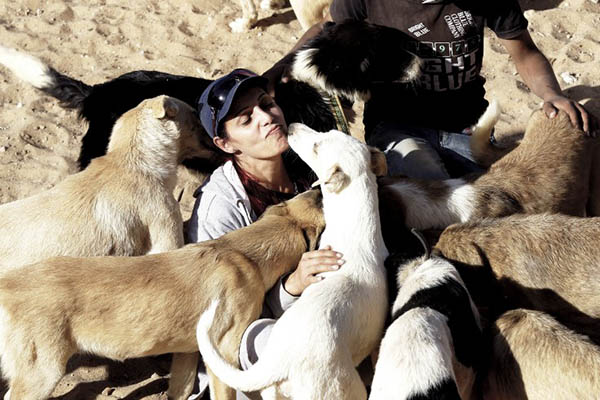 Syrian Team for Animal Rescue describes animals under its care as ‘forgotten victims’ of ongoing conflict.

In the sandy yard of a shelter near the Syrian capital Damascus, a three-legged dog bounds excitedly, her tongue swinging as she runs despite her amputated limb. Betty is one of 350 animals housed at a farm-turned-shelter run by the Syrian Team for Animal Rescue (STAR), whose volunteers describe their wards as “forgotten victims” of Syria’s war.

“The war spared no one. Animals have fled just like human beings, but at least humans have refugee centers and organizations to feed them,” say Hamada Azqul, an agricultural engineer and STAR volunteer.

More than 300,000 people have been killed and millions displaced by the conflict that began with anti-government protests in March 2011. And the conflict has not spared animals like Betty, a brown-haired mutt who lost a leg after sustaining a bullet wound.

The shelter, in Sahnaya, 14 kilometers southwest of Damascus, is home to dogs and cats, but also more exotic animal victims of the conflict, including turtles and colorful birds. Many are being treated for war wounds or animal abuse, which volunteers say has increased since the conflict began, while others were left behind by owners fleeing violence around Syria’s capital.

German shepherds and shaggy-haired terriers prance excitedly as STAR staff members stroll into the yard, the dogs jumping up on their hind legs to reach the faces of young volunteers.

Founded in May 2016, STAR is treating 110 animals in its infirmary, including Noisy, a frail blind cat, and Sweetie, a chocolate-brown dog who was shot in the back. Other pets have undergone amputations, are partially paralyzed, or are recovering from burns or knife wounds with the help of STAR’s 11 volunteers.

More than half of Syria’s population has been displaced by war, with nearly five million seeking refuge in neighboring countries. “People who were forced to flee didn’t take their pets with them,” says Hanadi al-Mutahasseb, STAR’s 38-year-old founder. Those animals left behind face starvation, possible injury by shells or gunfire, or abuse.

“In this war, everyone who carries weapons fires on animals that bother them, so more animals need support,” Mutahasseb says.

Every day, STAR receives dozens of Facebook messages from concerned citizens about wounded or abandoned animals, and its own network of volunteers brings in injured pets found wandering the streets.

Syria’s conflict has ravaged the country’s infrastructure and economy, leading to a devalued pound and high unemployment. That means the discarded scraps that many strays used to survive on are often no longer available, with Syrians using every last bit of food they can.

The dire economic situation—and the difficulty of obtaining visas to leave—have affected both Syria’s citizens and its animals. “Before the war, several European countries welcomed some of Syria’s critical animal cases. But today, animals can no longer travel because they, too, can’t get visas,” says volunteer Iman Amayra, 28. Her hair covered by a traditional white scarf, she plays with Carmen, a white cat who lost her eyes in a car accident.

STAR volunteers say their shelter faces a serious dearth of funds and resources, including equipment and medical know-how. Elissa Darwish, 34, fashions a makeshift splint from a child’s toy for Zahra, a tiny paralyzed kitten.

“Most of the vets have left, and we’re missing medication and equipment,” she says.

Zahra and other wounded cats are housed in small cages, with their own bowls of food and water. Healthy felines, meanwhile, enjoy a lazy life of naps in the sun or curled up in little nooks. Periodically, a cat will stretch out and saunter over to nibble on dry cat food or be stroked by an eager volunteer.

“Food costs us about 50,000 Syrian pounds [around $100] per day,” says volunteer Hani al-Khatib, stroking Brownie the dog, who is splayed across his lap. “We reached out to charities outside to get help, but we haven’t had a single response, probably because of the sanctions targeting Syria,” he adds.

The European Union and the United States have imposed financial sanctions and travel bans on more than 200 people since the conflict began, and have also enforced restrictions on investment. “The farm can hold 80 animals, but we have at least 250 today,” says Khatib, who is 24.

For Khatib, who has lost friends in the country’s violence, as well as to army enlistment or exile, the animals provide much-needed companionship. “These dogs are the only friends I have left.”