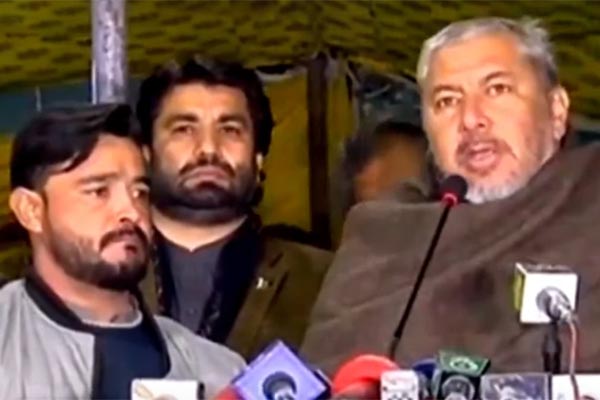 In a late night development, grieving families agree to bury bodies of slain coalminers after government accepts their demands

Shia Hazara protesters called off their sit-in—which had prompted nationwide protests in solidarity—at Quetta’s Western Bypass late on Friday night and announced they would bury coalminers slain by Islamic State militants after government lawmakers assured them that all their demands had been accepted and Prime Minister Imran Khan would visit them on Saturday.

Announcing the end to the sit-in, representatives of the Shuhada Action Committee and Majlis Wahdat-e-Muslimeen said federal cabinet members Ali Zaidi and Zulfi Bukhari, as well as Balochistan Chief Minister Jam Kamal Khan and National Assembly Deputy Speaker Qasim Suri had assured them that Khan, as well as other senior officials, would visit them today. The announcement followed the prime minister claiming earlier that he would not be “blackmailed” into visiting the protesters and would only reach Quetta after they had buried the slain colliers.

Khan’s statement drew widespread outrage, and enraged the mourners, with some announcing they would go on hunger strikes until death until he apologized for his remarks and visited the mourners. The banned rightwing Ahle Sunnat Wal Jamaat praised Khan’s decision, saying he should not be “blackmailed” by protesters.

Government spokespersons sought to defend Khan’s statement, claiming he had not been referring to the protesters as “blackmailers,” but his nationally televised speech left them with little recourse except to draw inappropriate examples to slain soldiers, and the prime minister not wanting to set a “precedent” by visiting the families of every victim of terrorism. Interior Minister Sheikh Rashid Ahmed also alleged that neighboring India was responsible for the terror act, adding that the protests were aiding the “enemy’s” efforts to destabilize Pakistan.

Following minister Zaidi’s announcement that there had been a breakthrough in talks between the government and the heirs of the victims, Shuhada Action Committee leader Agha Raza said the protests had been organized for the heirs of the deceased, and were ending because they were satisfied with the government’s assurances. He said the slain men would be buried at 10 a.m. on Saturday (today).

He also urged protesters across the country, staging sit-ins in solidarity with the Shia Hazara, to wrap up their protests peacefully, as all demands put forth had been accepted by the government. Following his announcement, solidarity camps in towns and cities across Pakistan, including in Karachi, Lahore, Islamabad and Peshawar were disbanded and blocked roads reopened for traffic.

Calling the prime minister insensitive, Pakistan Muslim League (Nawaz) Vice President Maryam Nawaz said his statement had worsened the crisis and he should apologize to the protesters. “Are they blackmailers?” she said on Friday evening, as she showed media pictures of protesting families, including children, during a press conference in Karachi. “I can only pray for such an arrogant, ruthless and egoistic man. This bayhis [insensitive] Khan has once again proved his selection wrong. And today I question the selectors if that is the only soghaat among the 220 million people they could find. If arrogance has any face today, it’s Imran Khan,” she added.

She also appealed to the protesters to stop waiting for the prime minister and bury their loved ones to grant their souls peace.

The Balochistan chief minister has established a joint investigation team (JIT) to fix responsibility on departments concerned for negligence in ensuring the protection of the Machh coalminers. He has also issued orders for compiling a database of coal workers and implementation of labor laws, and ordered the removal of the deputy commissioner and district police officer of Kachhi district. The government has also announced compensation for the families of the deceased.

Some in the government had alleged the bodies of the slain coalminers were “forcibly” taken to the protest site against the will of the grieving families, adding “some elements” were using the bodies to achieve their anti-Pakistan agenda. Relatives of the deceased have repeatedly denied this.

The protest came to an end after six days. On Jan. 3, armed men raided the residences of coalminers in Machh, separated the Hazara from the rest of the workers, and marched them to a nearby mountain. According to police, the attackers then tied the hands and feet of the Hazara, and opened fire on them. Some reports allege that several of the deceased also had their throats slit prior to being shot dead. The Islamic State militant group has claimed responsibility for the attack.